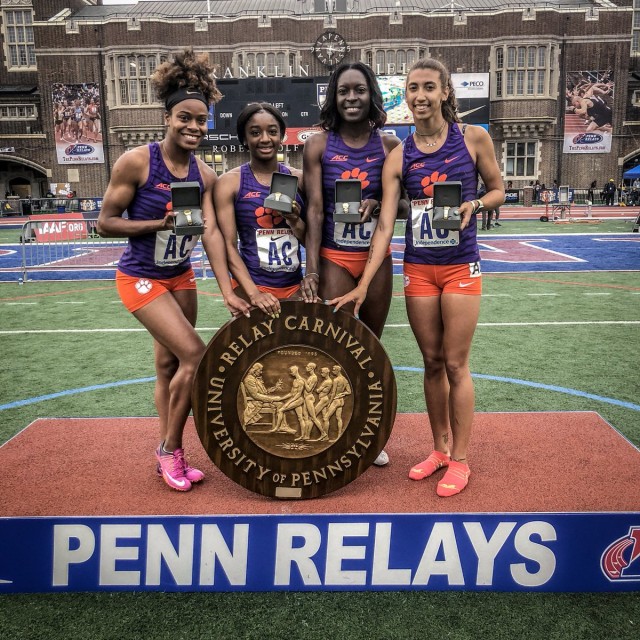 PHILADELPHIA – Clemson’s Kamryn McIntosh crossed the finish line at the 3:45.05 mark after running the final leg (800m) of the women’s sprint medley Championship of America (COA) Invitational to win the event for the Tigers Friday evening at the Quakers’ Franklin Field. McIntosh anchored Torie Robinson, Rebekah Smith and Fellan Ferguson in route to giving Clemson its first COA victory in program history, and second SMR win overall on the women’s side with the first-ever coming in 1992 in the collegiate section.

“We wanted to try and stack up and showcase what we have from a relay standpoint and it worked well,” said head coach Mark Elliott. “It was really exciting to get one of our first Penn Relays wins [this weekend]. The Penn Relays is a very old meet, dating back more than 100 years with a lot of history, so I’m very excited to win one of those big plaques to bring back to Clemson.”

The women’s 4x100m relay team consisting of Robinson, Smith, Ebony Williams and Sidney Marshall placed fourth overall in the COA finals. The group turned in a time of 44.85 seconds, topping last week’s then season-best. Their time at the Penn Relays would be good for No. 25 in the east region, entering this weekend.

Smith and Robinson stayed busy Friday as the duo also qualified for the Saturday’s 100m dash championship, which is slated for 3:35 p.m. Smith and Robinson went 2-3, respectively, in the event with Smith crossing the finish line in 11.53 seconds and Robinson in 11.62 seconds.

Lamb, Nate Gordon, Deron Gordon and Green guided the Tigers’ 4x400m relay team to a fourth-place overall finish in Friday’s collegiate section, which qualified them for Saturday’s Championship Invitational. The group registered a time of 3:08.92 to win the second heat. Saturday’s Championship Invitational is slated for 5:55 p.m., in the final Penn Relays event for the Tigers.

In the men’s DMR, Malik Epps, Deron Gordon, Oliver Lloyd and James Quattlebaum took fourth place with a time of 9:57.30. Lloyd posted the fastest 800m split (1:51.29) among all competitors, while Gordon claimed the second-fastest 400m split (47.82). Friday’s race marks the first DMR this season that the Tigers have competed in on the men’s side.

Deron Gordon got things started for the Tigers on the track Friday. Gordon placed fourth in the first heat and overall in the men’s 400m hurdles with a time of 51.73. Gordon currently ranks third in the ACC in the event from his performance at the Texas Relays in which he ran 50.88.

Freshman Harleigh White placed seventh overall in the women’s triple (college). White achieved a best mark of 12.06m on her sixth and final jump after making it out of flight No. 2 and into the finals. Additionally, White went 6-for-6 without fouling Saturday.

Freshman Harleigh White will be in the second flight of the women’s triple jump. Flight 1 is already underway. Flight No. 2 should start at around 12:15-12:30 p.m.#ClemsonTrackXC?? #NCAATF #PennRelays pic.twitter.com/Ih4iDP8BS7

In the men’s long jump, Ishmael Kamara placed fifth after achieving his best leap of the day on his sixth and final jump. Kamara’s effort earned him a distance of 7.19m, his third-best jump of the season.

In the ring, Grant Voeks threw his second-best heave in the men’s shot put (college). The sophomore achieved his best throw of 16.64m on his fifth throw of the day after fouling on his fourth.

Grant Voeks earns a fifth-place finish in the shot put. His fifth heave of the day was good for 16.64m, which is also his second-best mark this season.#ClemsonTrackXC?? #NCAATF #PennRelays pic.twitter.com/eC9iGDsyrS

Clemson resumes action at the Penn Relays Saturday (April 28) with Ishmael Kamara and D.J. Ledell in the men’s triple jump along with Dylan Ahrens in the men’s javelin at 9 a.m. Clemson is set to take to the track at 1:32 p.m., for the men’s 4x100m college finals. The 4x400m relays conclude Saturday’s events for the Tigers with the women at 5:40 p.m., and then men at 5:55 p.m.

Both qualified for championship Saturday (3:35 p.m.)