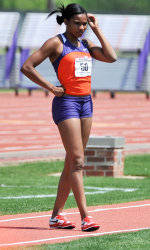 CLEMSON, SC – Alyssa Kulik nearly cemented her place in the women’s steeplechase at the upcoming NCAA East Preliminary Round after breaking the school record in the event Friday at the Georgia Tech Invitational. The sophomore from Simpsonville, SC improved on her personal best by over eight seconds and finished runner-up to highlight day one of action for the Tiger track & field teams.

Kulik crossed the finish line with a time of 10:32.46, which would rank 22nd in the East if the regular season ended today. The top 48 individuals in the East and West regions will be included in the fields for the preliminary NCAA rounds.

In other distance action, sophomore Kim Ruck was runner-up in the women’s 5K. The indoor All-American had a time of 16:25.92 in her first 5K since the ACC Outdoor Championships on April 17. Ruck currently ranks among the top 48 individuals in both the 5K and 10K in the East.

Charlton Rolle produced a season-best in the men’s 110 hurdles Friday, clocking a time of 13.84 to place 10th out of 54 competitors. He outlasted teammate Spencer Adams, who ran 13.87. Neither qualified for Saturday’s final. Michaylin Golladay was the top women’s finisher in the high hurdles for the Tigers. She had a time of 13.53 and was also 10th. Sonni Austin, a freshman from the Atlanta area, was 26th with a time of 14.48 in the event.

April Sinkler was the top collegiate finisher and overall runner-up in the women’s long jump Friday. Nike athlete Hyleas Fountain was the only competitor to finish ahead of the ACC champion. Sinkler had a top mark of 20’3″ on her final attempt of the night. Jasmine Brunson was ninth in the event with a jump of 19’9″, while Patricia Mamona had a season-best 19’5.25″ in the prelims but did not advance to the finals.

Zach Berg and Alex Padgett both competed in the men’s hammer throw. Berg came home with a sixth-place finish after a top throw of 206’3″, while Padgett was 14th with one legal throw at 189’6″. In the women’s event, Brittney Waller placed 10th with a throw of 161’9″.

Bethanie Wachna was third in the women’s javelin Friday night. The junior All-ACC performer out of Canada had a throw of 148’2″. Teammate Linda Buchholz was fourth after posting a mark of 144’8″ on her sixth and final attempt of the competition.

Miller Moss competed in several events Friday afternoon. He started in the pole vault, where he cleared 15’1″ to tie for fourth place. He then clocked a time of 15.27 into a headwind in the 110m hurdles. The school’s record-holder in the decathlon also competed in the javelin throw.

The teams return to action Saturday to conclude preparations for the NCAA East Prelims, which will be held May 27-29 in Greensboro, NC.