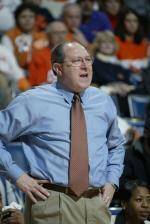 Brown, a 5-6 combination guard from Atlanta, GA, was a second-team All-State performer and North/South Player of the Year last season for Holy Innocence. She was also a member of the Tip-Off Club All-Girls Team and an AAU 16 and under All-American. Brown also is a phenomenal track athlete, as she has been state champion in the 100m, 200m, and long jump. Last year, she broke the Georgia high school long jump record.

“Christy is an exceptional athlete,” Davis said. “She had a great summer. She’s an AAU All-American who led her team to a fourth-place finish in the 16 and under division. She could play both guard positions.”

Yenser, a 5-11 wing from Marietta, GA, is a senior at Harrison High School. Yenser is the school’s leading scorer, with over 1,100 career points through her junior season. She averaged 20.2 points and 6 rebounds per game last season as a junior. Yenser was the Cobb County Tip-Off Club Player of the Year for 2004, and has also been All-County the last two years. Yenser, who has also lettered in softball, is a Georgia Merit Scholar Student.

“Susan is a versatile player,” Davis commented. “She can play any of the three perimeter positions. She is an excellent three-point shooter with great range. She is a great student of the game, and has great size for a guard.”