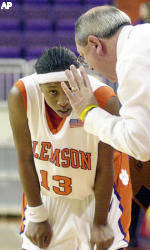 The Clemson women’s basketball team returns to action on Tuesday, November 30 to play host to nearby Furman University. The Lady Tigers will look to improve upon their 1-3 record. Tip-off is scheduled for 7:00 PM at Littlejohn Coliseum.

Clemson has lost three straight games after opening the season with a win over Western Carolina. The Lady Tigers are 1-1 this season against the Southern Conference, with a loss in the second game of the year to Appalachian State.

The Lady Tigers have played a host of newcomers this season, including junior college transfer and leading scorer Reggie Maddox. The Dyersburg, TN native leads the team at 9.3 points per game. Amanda White is second on the squad with 7.3 points per game.

Freshman Adrianne Bradshaw had a career night versus San Diego the last time out for Clemson. She hit 4-5 shots and finished the game with 12 points. She has started the last two games for the Lady Tigers.

Furman enters tomorrow night’s contest with a 2-1 record, with a loss to Georgia and wins over Gardner-Webb and UNC Asheville. The Paladins average 77.0 points per game as a team. In the win over UNC Asheville, Furman was 42-49 from the free throw line.

Clemson holds a 16-1 advantage in the series history between the two schools. The Paladins broke a 14-game losing streak with a win over the Lady Tigers in 2001-02. Clemson head coach Jim Davis is 14-1 in his career versus Furman.