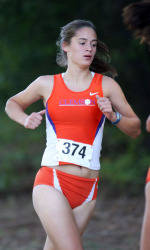 Philadelphia, PA – The women’s track & field team wrapped up three days of work Saturday at the 113th running of the Penn Relays at historic Franklin Field. The Lady Tigers’ 4x800m relay team finished 21st with a time of 9:23.58. The group was composed of three freshmen – Joanie Castagno, Christina Mason, and Jill Yandle – as well as junior Candice Johnson.

It was a successful week on several fronts for the Lady Tiger program. The shuttle hurdle relay team of Krystal Barringer, Patricia Mamona, Michaylin Golladay, and Polly Hardy finished fourth on Friday with an outstanding time of 56.35. The time ranks second in Clemson history for the shuttle hurdle relay.

Mamona experienced success individually in both horizontal jumps. The sophomore from Portugal was sixth place in the triple jump (42’6.25″) and 11th in the long jump (19’4″).

The Lady Tigers are off next week due to final exams, but will return to action at home on May 10 for the Orange & Purple Classic.