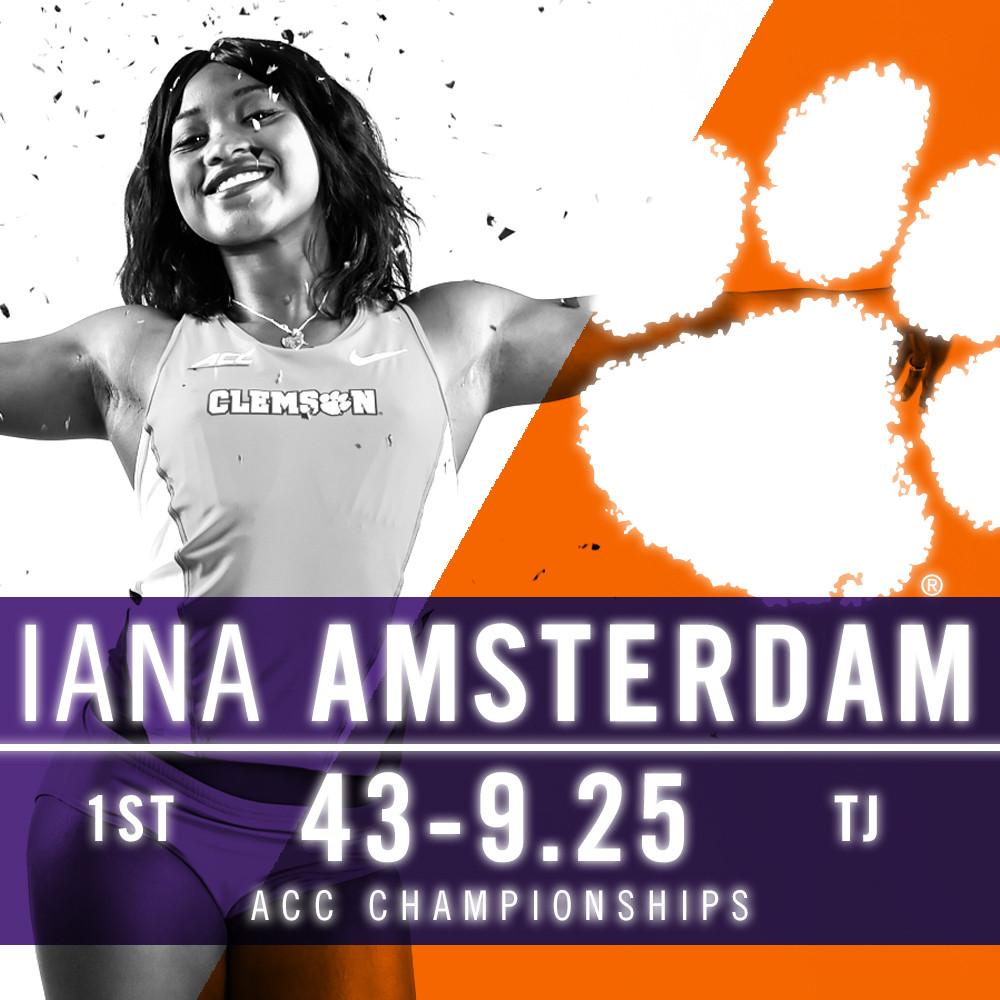 SOUTH BEND, Ind. – Clemson turned in 23 scoring efforts including 15 performances worthy of the podium in order to fuel a second place finish for the women and secure fourth place fourth place for the men on the final day of the 2017 Indoor Track & Field ACC Championships. The women finished just 15 points out of first place as Miami won its second-straight indoor title. As the 2017 runner-up, Clemson’s women have now finished second place or better in seven of the last eight indoor seasons including five championships.

Iana Amsterdam kicked off the day for the Tigers bringing home gold in the triple jump for the second time in her career. The senior registered a personal best 43-9.25 to win the event rank seventh in the nation. With the new personal best, Amsterdam moves up Clemson’s list of all-time greats in the event to fourth in program history. She has now medaled each of the last three seasons as she was the bronze medalist in 2016. Anasterasia Terrell completed her final indoor season with the best finish of her career as she was the runner-up to Amsterdam in the triple jump with leap distancing 41-9.25.

Grace Barnett continued to rack up points for the Tigers as she collected silver medals in the mile and 3k following her silver medal in the distance medley relay on Thursday night. Barnett was edged by six one-hundredths of a second in the mile as she crossed the finish line at 4:33.80 and she later clocked in at 9:21.34 in the 3k.

The 60 meter dash was perhaps Clemson’s most exciting event for the women as two of their four scorers earned a spot on the podium. Freshman Rebekah Smith is now the fastest female student-athlete in the ACC as she crossed the finish line at 7.31, just ahead of Torie Robinson who clocked in at 7.32 to earn the silver medal. Smith’s time also advances her in the program record book to eighth all-time.

Sabria Hadley and Ranee Ricketts also scored in the event as they took fourth and sixth place respectively. Hadley’s time of 23.36 ranks her 10th in Clemson history and Ricketts wasn’t far behind her at 7.43. The duo later scored again in the 200m as Hadley claimed second place with a time of 23.36 and Ricketts finished eighth at 24.30.

Ersula Farrow and Olivia James both scored for the Tigers before assisting Markeeta Thomas and Malayshia George in the 4x400m relay. James clocked in at 53.68 in the 400m to take sixth overall while Farrow ran the fourth fastest time in Clemson history to take fourth place. Farrow crossed the finish line at 2:04.98 while Lakeisha Warner took eighth place with a time of 2:09.87. James, Thomas, Farrow and George concluded the ACC finale with a third place effort in the 4x400m relay, combining for a time of 3:36.61.

The men’s performance was highlight by the Tigers in the 400m dash again as Jeffrey Green, Cordell Lamb and Michael Cheeks swept the indoor podium for the second-straight year and combined with Terrell Jackson to defend their title in the 4×400 meter relay with a time of 3:07.91. Green, Lamb and Cheeks finished first, second and third respectively with personal best times of 46.27, 46.68 and 46.71, advancing them to fourth, sixth and seventh in program history. Green’s time currently ranks him eighth in the nation.

Lamb and Cheeks scored in the 200 meter dash as well along with Alex Sands. Lamb reined in his second silver medal of the championship with a time of 21.19 while Cheeks and Sands took fourth and sixth respectively, crossing the finish line at 21.25 and 21.46.

Kirk Lewis finished the 60m hurdles in 7.87 to earn second place and claim his first ACC medal. John Lewis wasn’t far off from podium finish of his own in the 800 meter run as he completed the event in 1:48.68 to take fifth.

Clemson now shifts its focus to the NCAA Championships in College Station, Texas. Clemson will take its NCAA qualifiers to compete on the national stage on March 10 and 11.