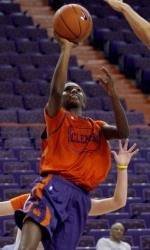 CLEMSON, SC – The White squad, coached by Yolett McPhee-McCuin, downed the Orange team, headed by Karleen Thompson, 41-32, in the annual Orange and White Women’s Basketball Scrimmage in Littlejohn Coliseum on Tuesday night. The teams played two 15-minute halves, the first of which went with traditional timing, while the second half went running clock.

Clemson has five freshmen on the roster, which was the 30th-ranked class in the nation according to ESPN Hoopgurlz. Itoro Coleman’s first recruiting haul saw the court for the first time as a team.

Freshman Nikki Dixon had six points including 2-4 form behind the arc to lead all players, while Chancie Dunn’s four rebounds from the guard position led all players. Guard Chelsea Lindsay had four points on 2-4 shooting, including a long jumper, and three rebounds and two assists for the Orange team.

Seniors Lindsey Mason and Shaniqua Pauldo combined for nine points in 30 combined minutes, and Natiece Ford had two points and two rebounds in the contest.

The Lady Tigers held the scrimmage after their annual Orange Brigade dinner, in whch they hosted more than 60 members of the booster group, as well as department members for a meet-and-greet with the team and coaches.

Clemson will hold its exhibition game on Friday, November 4, 2011 at 7:00 pm in Littlejohn Coliseum. They open the season on November 11 at 5:30 pm