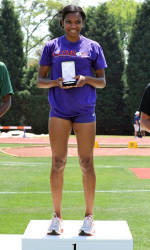 CLEMSON, SC – Liane Weber established an ACC record in the heptathlon Friday and won her first-ever outdoor conference championship to lead Clemson’s efforts on day two at the ACC Outdoor Championships. The Tiger women lead the meet, which is being held at the school’s Rock Norman Track Complex, with 65 points. Florida State is second with 38. The Tigers are bidding for the first-ever indoor-outdoor ACC sweep in Clemson women’s track & field history.

“Today is one of the toughest days in a multi-day championship,” said Lawrence Johnson, Clemson’s Director of Track & Field. “The kids competed hard. They were very motivated to make tomorrow an interesting day. We’re pleased with our progress, and hopefully we hope to carry it over into tomorrow. I’m so proud of our multi-event kids. To be able to get a school record at your home facility, where you put in the hours of training every day, makes it extra special.”

Weber took home her first-ever outdoor conference championship on Friday, eclipsing the previous ACC record in the heptathlon with 5,928 points. The league standard was previously 5,833 points in 2006 by Virginia Tech’s Saskia Triesscheijn. It was Weber’s fourth overall ACC championship, all in the multi-events. She became the first Tiger female to win the heptathlon since Annu Montell in 1997.

Weber got off to a solid start on Friday. She had a long jump of 19’2.5″, which set up a fantastic effort in the javelin that provided her with an insurmountable lead. She hit on the No. 2 mark in school history after producing a throw of 156’10”. She cruised to victory in the 800 meters, turning out a time of 2:19.78.

“I felt good coming into the meet, so I just tried to keep training at a high level,” Weber said. “I wasn’t 100 percent happy with my long jump, so I was happy to make up for it in the javelin. I had some ups and downs, but I’m really excited with the (ACC) record because I haven’t competed in the heptathlon in a couple of years.”

Patricia Mamona was All-ACC for the 10th time in her career Friday, and for the first time ever in the heptathlon. She produced a total of 5,247 points – third-best in Clemson history. Mamona’s best event Friday was the long jump, where she hit on a mark of 18’7″. Karine Farias, a freshman from Brazil, placed sixth in the heptathlon with a total of 4,961 points – seventh-best total in Clemson history.

April Sinkler took home her first outdoor conference crown with a stellar second attempt in the long jump. She hit a season-best mark of 21’0.75″ to earn her fifth ACC championship overall, her third in the long jump (she has won the last two ACC indoor long jump titles).

“I knew coming in that I had the home field advantage, but I didn’t want to relax out there,” Sinkler said. “This whole experience has been a 360 degree turn for me; Coach Johnson has done a great job getting me to focus on what I need to do to succeed.”

Providing support in the event was freshman Jasmine Brunson, a native of Bermuda. She was fifth with a jump of 19’6.25″, a mark that ranks among the top 10 in school history.

Miller Moss broke a nine-year old school record in the decathlon, eclipsing Andy Giesler’s mark of 7,619 points. The Sumter, SC native finished the grueling 10-event competition with 7,628 points and was runner-up for the second time in his ACC outdoor career. North Carolina’s Mateo Sossah won the event, but Moss was nonetheless pleased with his performance.

“You always feel you could’ve done something better, but you can’t beat yourself up over it when competing in the decathlon,” Moss said. “To achieve the school record in the decathlon, I just feel honored to be part of Clemson’s tradition in the multi-events.”

Moss extended his lead briefly in the decathlon after beating the field handily in the 110m hurdles. He put together a time of 14.42, but his margin was nearly erased after Sossah followed with a strong mark in the discus throw. Moss was impressive in the pole vault, clearing a height of 15’7″. He finished with a javelin throw of 153 feet, followed by a 1500 meter time of 4:40.73.

Josh Fowler picked up his second career All-ACC honor on Friday. The red-shirt junior from Inman, SC hit a long jump of 23’10.25″, despite a slight headwind. Fowler was previously all-conference during the 2010 indoor season. He place third Friday, just as he did at the conference indoor meet.

Alex Padgett finished fourth in the men’s shot put with a solid effort. He had an outdoor personal best with a throw of 57’9.75″, the fourth-best mark in Clemson history. In Friday’s lone running final, Clemson’s Alyssa Kulik was eighth in the 300m steeplechase. She improved on her personal best, running a time of 10:41.90.

A host of student-athletes from Clemson qualified for running finals during Friday’s preliminary action.

In the 100m dash, Clemson had a pair of qualifiers in the men’s race and three in the women’s competition. Justin Murdock had the fourth-best time in the prelims at 10.43, while freshman Warren Fraser clocked a 10.48 to qualify for his first-ever ACC outdoor final. In the women’s race, Stormy Kendrick established herself among the Clemson ranks with the third-best time in school history. The freshman from Gastonia, NC ran 11.32 and was second-best in the prelims. Kristine Scott (11.46) and Michaylin Golladay (11.62) also qualified for Saturday’s final.

Murdock’s availability for Saturday is unknown. He pulled up late in the 100m dash and did not start the 200m prelims. Fraser ran a time of 21.55 in the 200 and was the final at-large qualifier for Saturday. Three Clemson females qualified for the finals of the 200m dash, led by Kendrick with a time of 23.38. Her time ranks seventh in school history. Scott (23.58) and Golladay (23.81) also qualified for the 200 final.

Adams also qualified for the finals of the 400 intermediate hurdles. He had a time of 52.75 to win his heat. He will be joined in the final by another freshman, Jordan Rispress, who had a time of 53.59.