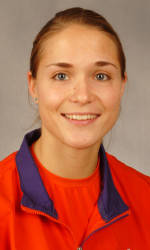 Clemson, SC – Liane Weber stands second after day one of the heptathlon at the Tiger Multi-Event Open, held at Clemson’s Rock Norman outdoor facility. The freshman from Wangen, Germany has a total of 3,211 points and trails only Lela Nelson of Nike in the overall standings.

Weber has already posted an NCAA provisional qualifying total in the heptathlon and was runner-up at the ACC Championships last month in the seven-event competition. She is the school’s record-holder in the heptathlon. On Monday, she posted outdoor bests in the 200m dash (25.40) and shot put (38’10.5″). She also cleared 5’4.5″ in the high jump and ran a 14.37 in the 100m hurdles.

Linda Buchholz, fellow freshman and native of Germany, has a total of 3,120 points through four of the seven events. She did not compete in the heptathlon at the ACC Championships, but scored indoors in the pentathlon. Buchholz posted outdoor season bests in the 100m hurdles (14.59) and high jump (5’5.75″). She also had a strong mark of 38’1.5″ in the shot put. She has qualified for regionals in the javelin throw as well.

In other action, Polly Hardy and Krystal Barringer took part in the high hurdles portion of the heptathlon Monday. Hardy nearly matched her personal best after running a 13.58 in the event. Her best is 13.57, as she has qualified numerous times for regionals this season. Barringer ran a 14.45 on Monday.

The heptathlon will conclude Tuesday at the school’s outdoor facility.