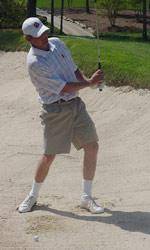 CLEMSON, S.C.-Clemson All-America golfer D.J. Trahan remains firm at the top of the Golfweek men’s amateur rankings this week. Trahan added 50 points to his lead over Adam Groom of Australia following his victory at the Monroe Invitational this past weekend.

Trahan, a junior from Inman, S.C., claimed the Monroe Invitational in Pittsford, NY after he shot a 12-under-par 268, an event record. Trahan also shot the low round of the tournament when he fired a 8-under-par 62 during the second round last Thursday. His 62 matched the all-time low round for the par-70 course.

The win at the Monroe Golf Club was his second major amateur title this year. He also won the Azalea Invitational back in April. In addition, Trahan captured individual honors during three of Clemson’s tournaments this past season.

Trahan, who won both the Hogan and Nicklaus awards this past season at Clemson, currently holds a 105-point advantage over Groom. Brian Nosler, a native of Lake Oswego, OR, moved up to third place this week.