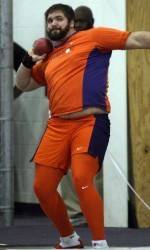 CLEMSON, SC – Alex Padgett won a pair of throwing events Saturday to highlight several individual event victories by Clemson athletes at the season-opening Orange & Purple Winter Classic. Clemson athletes won events across the board in the meet that serves as the school’s annual indoor season opener.

“It was a productive first meet for us,” said Lawrence Johnson, Clemson’s Director of Track & Field. “We always use the opener to examine our own squad and see what certain kids look like when you put them in a uniform. We put up some good numbers today and have a lot to look forward to this season.”

Briana Johnson (8.60) was the team’s top finisher in fourth. Janice Jackson (8.69) successfully returned from ACL surgery that forced her to miss the 2009-10 season, placing sixth overall. Jasmine Edgerson (8.72) was seventh in the final.

Clemson produced a pair of runner-up performances in the 4x400m relay. The men’s team of Jordan Rispress, Moss, La’Mont Jackson and Kyle Younkin (3:17.99) fell just shy in its bid to defeat Charlotte. The women’s group of Whitney Fountain, Wesh, Jasmine Brunson and Karine Farias (3:51.64) was second to an unattached group of athletes.

Michael Kopanski, a freshman from Dacula, GA, won the men’s pole vault competition in his first collegiate meet. The 6-foot-2 Kopanski was the only participant Saturday to clear 15’7″. In the women’s pole vault, freshman Lauren Terstappen of Phoenixville, PA cleared 12’1.5″ on her first try and actually tied Georgia Tech’s Joanna Wright at the height, but she was named runner-up due to missing the bar at a previous height. Her clearance is already eighth-best in Clemson women’s indoor track & field history.

The Tiger teams return to training for several weeks before competing in the Clemson Invitational on Jan. 7-8 at home.