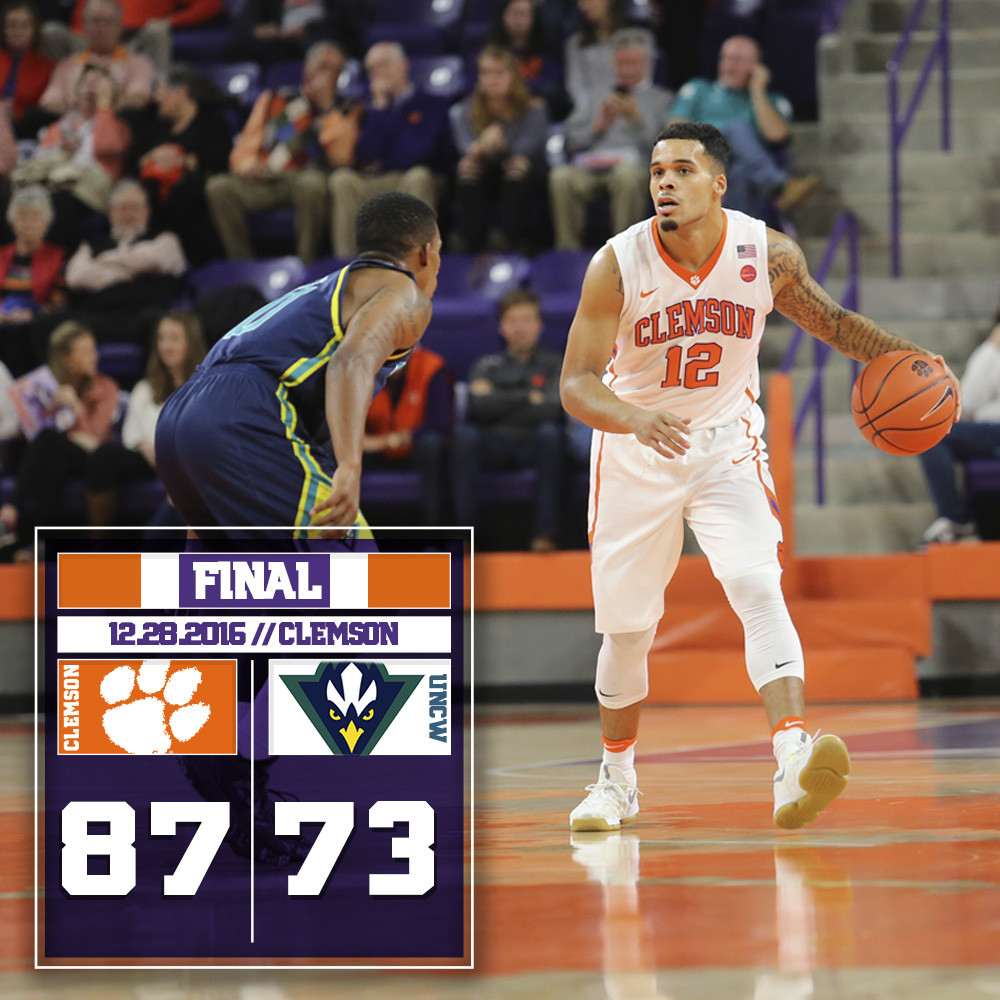 CLEMSON, S.C. — The Tiger basketball team matched its longest winning streak since the 2010-11 season with its eighth consecutive victory on Wednesday, 87-73 over UNC Wilmington in front of a near capacity crowd in Littlejohn Coliseum. Clemson moved to 10-2 on the season, while the Seahawks fell to 11-2.

Jaron Blossomgame scored 20 points to lead the way for the Tigers, who featured five scorers in double figures. Avry Holmes (13), Elijah Thomas (12), Sidy Djitte (11) and Shelton Mitchell (10) also posted double digits. Mitchell led the attack offensively with six assists. Clemson shot a season-best 55.6 percent from the floor and was 25-30 (.833) at the free throw line as well. Wilmington was led by Denzel Ingram’s 20 points.

Clemson trailed 18-17 midway through the opening frame, but answered emphatically with a 10-0 run in less than two minutes of play. The run was punctuated by a three-point play from Blossomgame. Clemson had a flurry of exciting plays in the first half, highlighted by a fastbreak alley-oop from Holmes to Donte Grantham, following a long outlet pass from Thomas. The Tigers’ newest piece was a factor on both ends in the first half, scoring 10 points and adding a career-best five blocks to boot.

The second half saw the Tigers hit over 70 percent of their field goal attempts for the first several minutes, as the lead ballooned to as much as 24 on a long defensive rebound and full-court sprint from Marcquise Reed to the bucket. Reed finished with six points and six rebounds.

The Tigers begin ACC play on Saturday at 12 p.m. at Wake Forest. The Tigers and Demon Deacons’ opener will be televised by the regional sports network.

Postgame QuotesClemson Head Coach Brad BrownellOpening statement:“We beat a really good team today. I think UNC Wilmington is on the way to having a really good season. I just thought our guys prepared well the last couple of days. I thought we executed our gameplan really well.“We wanted to go inside. We wanted to make size matter in the game. I thought we did. We had some blocks. Defensively, I thought we made them shoot over us a bunch, which was good. Jaron (Blossomgame) did some really good things. Our post players, both Sidy (Djitte) and Elijah (Thomas) scored.“I’m just really pleased with the way we played. We took care of the ball reasonably well. We also made good decisions against the break. We talked about ‘go versus flow’ and when to go and try to attack but then when to try to flow into offense. And I thought we had a good mix of both. Again, I’m pleased with the win. Good performance by our team.”On Clemson’s offensive efficiency:“Teams come in with different kinds of plans. I think Wilmington wanted to defend the three more, so there wasn’t double-teaming. There wasn’t as much help on penetration. And we only took eight threes, which I think showed good discipline.”On what Shelton Mitchell and Elijah Thomas have brought to the team:“It’s been a team that’s had to adjust. We’re fortunate that we’re older. Shelton Mitchell’s injury at the beginning of the season set us back a little bit because we played all fall with him as our point guard, and I think you saw tonight what kind of a difference he can make for us. And we played without Elijah Thomas up until the last couple of games, and he showed why his value is high. He has great hands and finishes around the rim and gets his hands on balls to block shots.”UNC Wilmington Head Coach Kevin KeattsOpening statement:“We played against a very good Clemson team, obviously on their home floor. When you look at what they’ve done in the non-conference, I think they’ve done a tremendous job coming into the game, obviously now with 10 wins. And when you look at them, and I’ve watched pretty much every game of those guys, I respected and knew how good they were. Great size, they’ve got a team that can shoot it, and they’re being led by a very good player, [Jaron] Blossomgame. When you look at their two losses on the year, they could have easily win either way [with] the Oklahoma loss and also the Xavier loss. We lost to a very good basketball team that has a chance to be, in my opinion, an NCAA team, on its home floor tonight.”On being out of rhythm tonight:“If Chris [Flemmings] has a better game, and not that we win or lose because he plays well, but when you’re playing against an ACC high major team on their floor, then you’ve got to have everybody on the same page and everybody playing well. And we did. We had three guys that were playing very well when you look at C.J. Bryce, Denzel Ingram, and even Devontae Cacock, despite the foul situation I thought he played well. But we didn’t have that full-scoring guy all of a sudden and that would have been Chris [Flemmings].”On missing three-pointers:“When you look at the stat sheet I never worry about how many threes we take because I give them tremendous offensive freedom. We’ve taken those shots and we’ve made them. But if you take out Flemmings’ 0-7, we don’t shoot as badly, and certainly he didn’t have a great night from behind the arc.”