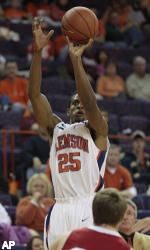  Clemson has not beaten North Carolina since the 2003-04 season, Oliver Purnell’s first year. Clemson defeated a 13th ranked North Carolina team that day, 81-72 behind a school record 11-13 three-point shooting day. North Carolina has won six in a row in the series.

 Clemson has defeated a top 20 North Carolina team 10 times in its history. That includes eight wins over top 10 UNC teams since 1967.

 Clemson is ranked 19th in the nation in both polls this week, the seventh straight week Clemson has been ranked in the top 25 in both polls. North Carolina is ranked first. This is the 25th meeting of top 25 teams in the history of Littlejohn Coliseum. Clemson is 16-8 in the previous 24, but is just 1-5 against North Carolina when both teams are ranked. Clemson is 1-12 lifetime in games vs. UNC when both teams are ranked in the top 25 entering the game regardless of site.

 Clemson freshman Terrence Oglesby is averaging 12.5 points per game. He is scoring at a 28.3 rate when pro rated to a 40 minute game, on pace for a Clemson record. He has made 30 of his last 56 three-point shots.

 North Carolina enters this game with Hall of Fame Coach Roy Williams on the sidelines. The last time a coach came to Clemson with Hall of Fame credntials on his resume the Tigers came away with a win. The Tigers defeated Syracuse and Hall of Fame head Coach Jim Boeheim in the NIT quarterfinals last year.

 James Mays, a native of Garner, NC, is back in the Clemson lineup after missing five games due to a hip injury. This will be his fourth game back in the lineup. He had 18 points in Clemson’s win at Alabama.

 Clemson is coming off a 87-61 win at Alabama on Jan. 1. That 26-point victory is the largest victory margin in Clemson history on the road against an SEC team.

 Demontez Stitt ranks second in the ACC in free throw shooting. The freshman from Matthews, NC has made 38-for-43 from the charity stripe for an accuracy mark of 88.4 percent. He has made 15 straight

 Cliff Hammonds has 213 career three-point goals, and needs just two in Sunday’s game to move past Will Solomon for second place in school history. Terrell McIntyre (1995-99) is Clemson’s all-time leader with 259 three-point goals in his career. He has made at least one three-point basket in each of Clemson’s last 40 games dating to last year. He leads the ACC in assist/turnover ratio with a 2.94 figure.

 Clemson is one of six schools ranked in the top 25 in both football and basketball.