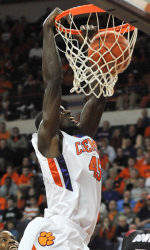 Tigers to Face East Carolina on the Road Wednesday Night

QUICK FACTS  Clemson and East Carolina will meet for the fourth time in the series on Wednesday. All three previous meetings have occurred during Oliver Purnell’s tenure (2003-present) at Clemson.

 The Tigers have won all three meetings. Clemson won last season, 79-66, thanks in large part to a career-high 14 points from Jerai Grant. Two years ago, Clemson won at East Carolina by a score of 82-67 after hitting 12-for-24 from three-point range at Minges Coliseum.

 The Tigers returned to action after a week for final exams and defeated Furman by a score of 82-53. Clemson got a 25-point, 14-rebound performance from senior Trevor Booker. His younger brother, Devin, chipped in 11 for the Tigers.

 The Pirates enter Wednesday’s game with a 4-5 overall record, against some tough opponents. Two of East Carolina’s losses were to teams from power conferences, Wake Forest (ACC) and Tennessee (SEC).

 Clemson Head Coach Oliver Purnell’s is 23rd on the all-time victory list among ACC coaches. He has 125 total wins and is in his seventh year with the program. He needs just one win to tie the late Skip Prosser (Wake Forest) for 22nd on the list.

 The Tigers are seeking their 12th consecutive non-conference road win Wednesday. Clemson’s current 11-game streak, which is the longest by any team in the ACC, is also a school record.

 For the first time since a game at Duke in 2005, and for just the second time since 1991, the Tigers did not make a three-point goal in the win over Furman. Clemson, which ranked second in the ACC in three-point accuracy entering the contest, went 0-for-11.

 The 36 points scored by Trevor and Devin Booker against Furman was the most by a brother combination at Clemson since Feb. 18, 1967. That day, Randy and Richie Mahaffey scored 38 points together as the Tigers upset No. 4 North Carolina.

 Trevor Booker is coming off his fourth double-double this season, the 27th of his career. He is tied for seventh in school history with Richie Mahaffey in career double-doubles. He needs four to pass Randy Mahaffey for fifth on the school’s all-time list.

 Demontez Stitt has averaged 14.6 points and 4.0 assists per game over Clemson’s last five outings. During that time, the junior point guard has made 26 of 53 field goal attempts (49.1 percent).

 Karolis Petrukonis will earn his degree Thursday in three and a half years, then leave Clemson to seek professional opportunities closer to his native country of Lithuania.