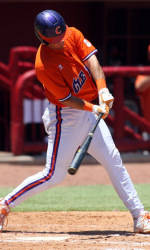 Jason Stolz hit two home runs, while Dominic Leone and Scott Firth combined to limit Coastal Carolina to three runs on seven hits in Clemson’s 5-3 win over the Chanticleers in the Colulmbia Regional in front of 6,111 fans at Carolina Stadium on Sunday afternoon. The Tigers, who stayed alive and moved to 2-1 in the regional, improved to 35-27 on the season. The Chanticleers, who were 1-2 in the regional, finished their season with a 42-19 record.

Trailing 2-1, Clemson scored three runs in the fourth inning to take the lead for good, capped by Stolz’s second long ball of the game, a two-run shot to left field. The Tigers added an insurance run in the top of the ninth inning, then Scott Firth struck out all three batters in the bottom of the ninth inning to close out the game.

Starter Dominic Leone (7-4) earned the win by tossing 7.0 strong innings. He gave up six hits, three runs (two earned), and four walks with six strikeouts. Firth pitched 2.0 scoreless innings of one-hit ball with three strikeouts to record his third save of the season.

The Chanticleers wasted little time taking the game’s first lead in the first inning. Ted Blackman led off with a walk on nine pitches and advanced to third on Jacob May’s single to right field. Daniel Bowman lofted a sacrifice fly to right field to score Blackman.

Stolz tied the score in the top of the third inning when he led off with a home run to left-center. Two batters later, Thomas Brittle blooped a one-out single to right-center and stole second. Brittle tried to steal third, but Smith did a reverse-pivot move and got Brittle in a rundown. On the way to third base, Brittle went out of the baseline to avoid third-baseman Tripp Martin according to the third-base umpire and was ruled out as Martin was unable to catch the throw from second. Richie Shaffer walked with two outs, but Phil Pohl grounded out to end the inning.

Blackman gave the Chanticleers the lead back in the bottom of the third inning when he belted a solo home run to right field, his first career long ball.

In the fourth inning, Jay Baum led off with a walk and advanced to second two batters later on Spencer Kieboom’s groundout to second. Brad Felder followed with a two-out double off the fence in right-center to score Baum. Stolz then blasted a two-run homer to left field, his second long ball of the game and seventh of the season.

Brian Pruett blooped a one-out single to right-center in the fifth inning and Blackman walked. May followed with a sharply-hit grounder to Stolz at shortstop. Stolz threw to Wilkerson at second for out #2, but Wilkerson’s throw to first, which would have been in time for an inning-ending double play, was errant, allowing Pruett to score.

Rich Witten led off the bottom of the sixth inning with a pop-up in the infield that was lost in the sun by first-baseman Jon McGibbon, allowing Witten to move to second on a double. Witten advanced to third base on Alex Buccilli’s sacrifice bunt and Frawley drew an 11-pitch walk. However, Justin Creel struck out and Martin fouled out to end the inning.

Bowman led off the eighth inning with a single up the middle and advanced to second on Witten’s groundout. Buccilli’s flyout to center advanced Bowman to third base, then Frawley walked on four pitches. But pinch-hitter Luke Willis grounded out to short to end the inning.

In the top of the ninth inning, Brittle drew a two-out walk, then Shaffer also walked. Pohl then lined a single to center to score Brittle and give Clemson a 5-3 lead. Pinch-hitter Joe Costigan was hit by a 2-2 pitch to load the bases, but McGibbon flied out to deep centerfield to end the inning.

Shaffer, Pohl, and Felder added two hits apiece for the Tigers, who totaled 11 hits in the game. Clemson was also 7-for-16 (.438) with two outs. In two games against the Chanticleers in the Columbia Regional, Clemson was 17-for-33 (.515) with two outs.

May had a team-high two hits for Coastal Carolina, who had seven hits in the contest.