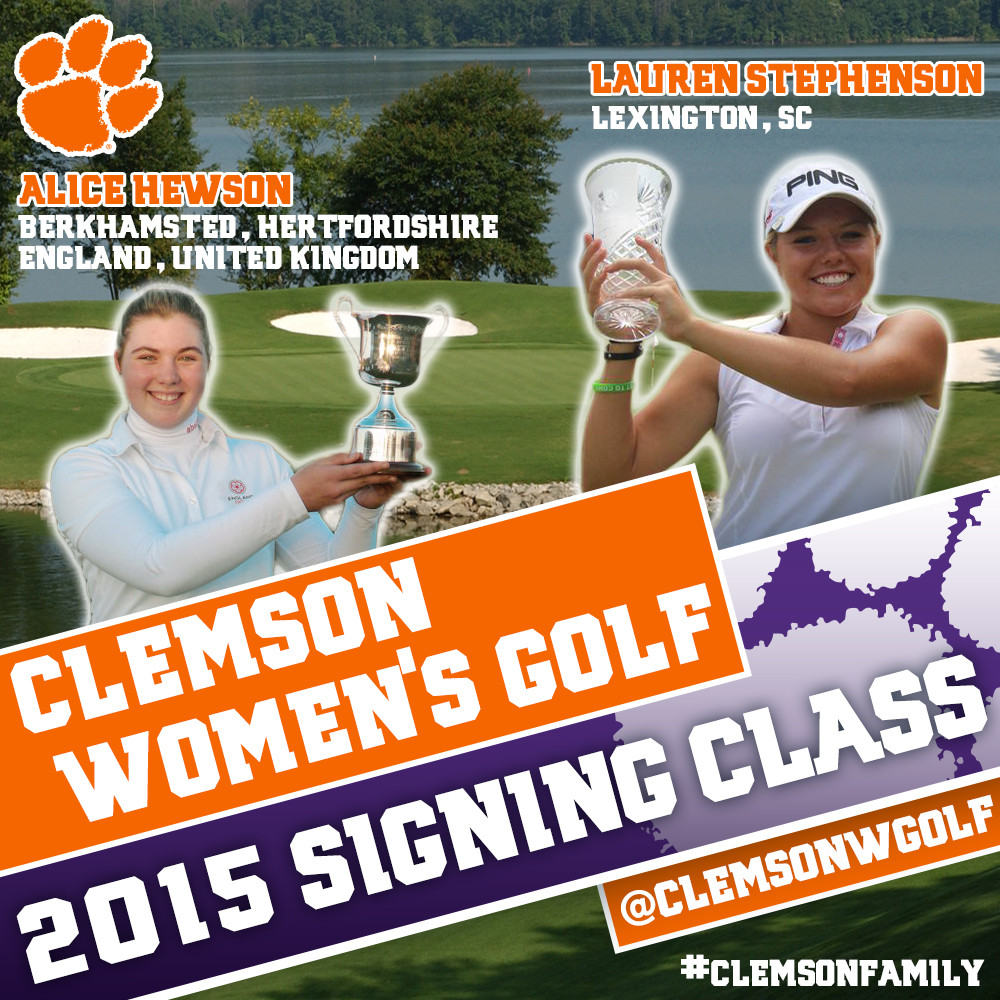 CLEMSON, S.C.- Head coach J.T. Horton and the Clemson women’s golf program have added two signees to the class of 2015. Lauren Stephenson and Alice Hewson will join the Tigers next August.

“This is an exciting day for our women’s golf program at Clemson,” said Horton.  “Lauren and Alice are two outstanding players, they will bring an immediate impact to our team. They bring a wealth of experience and each are capable of winning a tournament at anytime. Their games are dynamic and it will be fun to see them represent Clemson University.”

Stephenson won the AJGA Girls Championship, the Wells Fargo Junior Classic and the WSCGA Junior Girls’ State Championship in 2014, a year in which she had no finishes below 23rd.  In 2014, she also finished ninth in the junior PGA Championship and made it to the round of 32 in the U.S. Women’s Amateur and round of 16 at the North & South Amateur at Pinehurst. She qualified for the US Girls Junior Championship three times.

At Lexington High School, Stephenson helped propel the team to three consecutive 4A South Carolina State Girls Golf Championships in 2012, 2013 and 2014. She won the state individual title in both 2013 and 2014 and was named to the all-state team five times and the all-region team six times. She was also the 4A high school South Carolina state Player of the Year twice and the Region 5-AAAA Player of the Year five times.  She is also a member of the National Honor Society at Lexington High School.

“I am very excited about Lauren joining the Clemson Family and the impact she will make on our program. She is without question one of best players in the country as is proven with her accomplishments and ranking. Lauren has an amazing calmness when she plays the game with an uncanny ability to shoot low scores. She is extremely talented and her confidence is contagious.  It will be great to see what Lauren will accomplish in women’s college golf as a Clemson Tiger.”

Hewson, from Berkhamsted, Hertfordshire, United Kingdom is the second addition to this year’s class. She is currently ranked 71st in the world amateur golf rankings (WAGR). She has competed as part of the English National Team at both the girls and women’s level.  Hewson has individual victories in 2014 at the Crtichley Salver (Sunningdale) and the St. Rule (St. Andrews).

In her playing career, Hewson also has wins in the Daily Telegraph, the Scottish U-16 Championship and the English U-13 Championship. She has helped England to team victories in the European Junior Championship in 2013, and the Ladies Home International and the Junior Home Internationals in 2014. She shot a nine-under-par on the famous Old Course at St. Andrews.

“Alice is one of the best juniors in all of Europe and brings a super amount of talent to our team. She is very athletic, strong and has an explosive game. She brings a wealth of tournament experience at the individual and team level. She can shoot some low scores as evident by her -9 at the Old Course at St. Andrews. Her game is a lot of fun to watch and you can expect her to make a major influence on the success of our program. I am so glad she is part of the Clemson Family.”