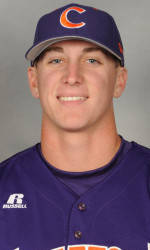 Clemson tied its season high with 16 hits en route to a 10-5 win at #18 Georgia in front of 2,691 fans at Foley Field on Tuesday night. The Tigers, who took a 1-0 lead in the home-and-home season series with Georgia, improved to 12-11. The Bulldogs dropped to 17-9 in 2012. Clemson’s win marked its fifth in a row over Georgia. The two teams will square off at Doug Kingsmore Stadium on April 11.

The Tigers scored a run in the top of the first inning before the Bulldogs responded with three runs in the bottom of the first. But Clemson took the lead for good with three runs in the second, capped by Richie Shaffer’s two-run homer, and never relinquished its lead. The Tigers scored in seven of nine innings and cruised to the five-run victory.

Freshman righthander Daniel Gossett (2-2) earned the win in a starting role. In 5.0 innings pitched, he yielded six hits, four runs, and three walks with four strikeouts. Four Tiger relievers combined to give up just two hits and one run in the final 4.0 innings to close out the game.

Luke Crumley (1-1), the second of eight Georgia pitchers, suffered the loss. He surrendered two hits, one run, and two walks with one strikeout in 1.2 innings pitched.

For the seventh time in 2012, the Tigers scored in the first inning. Steve Wilkerson lined the first pitch of the game to center for a single to extend his hitting streak to 11 games, then the next two Tigers were retired. Phil Pohl kept the inning alive with a two-out single to left field, then Brad Felder walked. Spencer Kieboom drew a bases-loaded walk to score Wilkerson.

In the bottom of the first inning, Levi Hyams led off with a single to left field, then Nelson Ward hit a slow grounder through the left side for a single on a perfectly-executed hit-and-run play. Kyle Farmer grounded into a 5-3 double play, but Ward moved to third on a wild pitch and came home on another wild pitch to tie the score. After Hunter Cole and Brett DeLoach drew two-out walks, Colby May laced an 0-2 pitch over the head of Felder, who misjudged the ball, in right field for a double to score Cole and DeLoach.

The Tigers responded with three two-out runs in the second inning to regain the lead for good. Jay Baum led off with a single to right-center and Tyler Slaton followed with an infield single. Baum was retired at third on Wilkerson’s fielder’s choice, then Slaton and Wilkerson moved up a base on Jason Stolz’s groundout. Slaton scored on a wild pitch with two outs, then Richie Shaffer snapped an 0-for-18 slump with an opposite-field, two-run homer to right-center, his fifth long ball of the year.

In the fourth inning, Shaffer reached and advanced to second on a one-out throwing error by third-baseman Curt Powell. Pohl followed with a single through the left side to score Shaffer.

The Tigers tacked on another run in the fifth inning. Kieboom led off with a walk, moved to second on Jon McGibbon’s sacrifice bunt, and advanced to third on Baum’s groundout to second. Slaton then came through with a two-out single through the right side to score Kieboom.

Cole led off the bottom of the sixth inning with a home run to left-center, his fourth long ball of the season.

In the seventh inning, Stolz blooped a two-out single to right field and scored on Shaffer’s double down the left-field line.

Felder led off the eighth inning with a single through the left side, moved to second on a passed ball, and advanced to third on Kieboom’s groundout. McGibbon then drove Felder home on a sacrifice fly to center.

In the ninth inning, Powell lined a one-out single to left-center and Joey Delmonico was hit-by-pitch. Two batters later with two outs, Hyams loaded the bases with an infield single, then Powell scored on a balk. Kevin Ruiz followed with a line drive in the left-field gap, but Baum made a diving catch to save two runs and end the game.

Shaffer and Pohl led Clemson’s 16-hit outburst with three hits apiece. Shaffer went 3-for-6 with a homer, two doubles, three RBIs, and two runs. He added to his outstanding numbers against SEC foes. He is 9-for-15 (.600) with three homers, four doubles, seven RBIs, eight runs, six walks, and a .714 on-base percentage in just four games against SEC teams (#2 South Carolina and #18 Georgia) in 2012.

May went 2-for-3 with a double and two RBIs to lead Georgia, who amassed eight hits in the contest.

Clemson will host Presbyterian College on Wednesday at Doug Kingsmore Stadium at 6:30 PM.