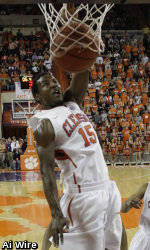 CLEMSON, SC – Clemson placed a league-high four men’s basketball players on the 2012 All-ACC Academic Team, as announced by Commissioner John Swofford on Friday. Tanner Smith was named to the team for a fourth straight time, joining Shawan Robinson (2002-06) as the only four-time selections in Clemson history. T.J. Sapp and Andre Young were also named to the team. Clemson’s four selections matched the program’s high of four in 1984.

Smith, who earned his undergraduate degree in marketing from Clemson in December, is only the second player in school history to be All-ACC Academic four times. He also ended his career as a three-time Capital One Academic All-District selection. Smith leads the Tigers in assists per game and is second on the team in points per game and third in rebounding.

Young was named to the All-ACC Academic Team for the second time in his career, previously winning the honor in 2010 as a sophomore. He is on track to graduate with a degree in health science in May. Young, a native of Albany, GA, is Clemson’s leading scorer at 13.2 points per game and also leads the Tigers with 61 three-point goals this season.

Coleman was named to the team as a freshman. The native of Philadelphia, PA is majoring in parks, recreation & tourism management. He has played in 12 of the 15 ACC regular season games, averaging 2.6 points and 1.8 rebounds per game.

Sapp also earned the All-ACC Academic Team nod as a freshman. Hailing from Fort Lauderdale, FL, Sapp has started nine games and played in all 29 this season for Brad Brownell’s Tigers. He is third on the team with 24 three-point goals, shooting 33 percent from long distance. He has also contributed 22 steals defensively, tied for fourth-most on the team.