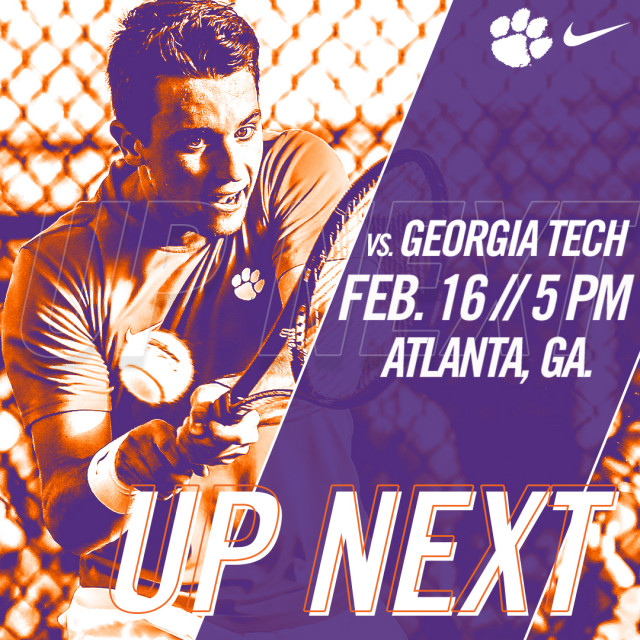 – The Tigers are currently on a four-match winning streak dating back to Jan. 26. Clemson’s last and only loss this season came to Charlotte on Jan. 21.

– The Tigers opened the 2018 season on Jan. 13 with a win over Presbyterian College (6-1) at Furman’s Mickel Tennis Center in Greenville, S.C.

– Clemson’s 2018 roster is made up of two seniors, one junior, three sophomores and four freshmen.

– The duo of Alex Favrot and Simon Baudry are ranked 33rd in the country according to the ITA doubles ranking that were released on Feb. 7, 2018. The two teamed up and advanced to the Round of 16 at the Oracle ITA Fall National Championship and are 7-2 overall this season, 3-1 in dual matches at No. 1.

– Favrot is also ranked 91st according to the ITA singles rankings, having a 3-1 record at No. 1 in dual matches this season.

– Freshman Yizhou Liu earned a win at No. 5 singles in his collegiate debut on Jan. 13 against PC.

– Sam Edwards and Liu have teamed up to form the Tigers’ No. 2 doubles team, and the two are 5-1 in dual matches this season.

– The Yellow Jackets are coming off a 4-0 loss to No. 4 Georgia last weekend at the USTA National Campus in Orlando, Fla.

– Carlos Divar is leading Georgia Tech, going 4-1 at No.1 and 13-4 overall this season. The sophomore is ranked 39th according to the ITA and is 2-2 against nationally ranked opponents.

– Kenny Thorne enters his 20th season at the helm of the Georgia Tech Yellow Jackets.