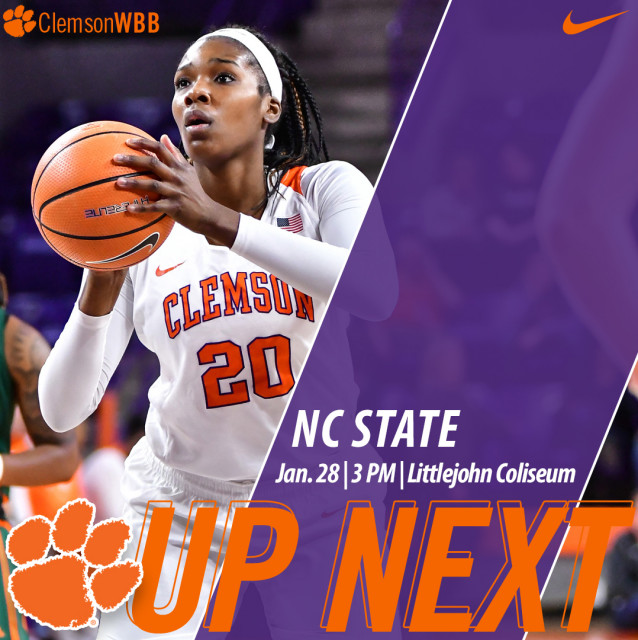 – This is Alumni Weekend for Clemson women’s basketball, and several former players and staff members will be recognized at halftime of the game.

– Sunday is Superhero Day at Littlejohn Coliseum. The first 700 fans (300 kids, 400 adults) will receive a free Clemson Superhero t-shirt. Children aged 12 and under will receive free admission if dressed like a superhero.

– There are also giveaways planned for Clemson students during every single timeout.

– Clemson’s defense has held two of the nation’s top-10 teams to some of their lowest scoring outputs of the season. On Nov. 16, the Tigers held No. 10/10 South Carolina to 66 points in Littlejohn Coliseum, the Gamecocks’ second-lowest point total of the season to date. On Jan. 4, also at home at Littlejohn, Clemson held No. 12/11 Florida State to 69 points, tied for the Seminoles’ second-lowest scoring output through their first 20 games.

– Thornton leads the Tigers in scoring overall and in ACC play. The 2017 ACC All-Freshman Team selection is averaging 10.1 points per game on the season, and 12.6 points per game through the Tigers’ first eight ACC games.

– Edwards’ 55 steals rank third among ACC players and 27th among all players nationally. On Nov. 13, 2017, Edwards posted nine steals in the Tigers’ 56-48 win over South Carolina State, tying the Clemson record for steals in a single game. Four different players have recorded nine steals in a game previously for the Tigers, however, it had not been done in 30 years, when Ramona O’Neil picked up nine steals against Virginia on Feb. 14, 1987.

– Last season, the Tigers traveled to Raleigh on Jan. 22, 2017 and played well against the then-No. 21/21 Wolfpack, ultimately falling 65-53. Danielle Edwards led the Tigers with 15 points, while Jaia Alexander and Kobi Thornton had 13 apiece. Aliyah Collier pulled down 14 rebounds in the contest.