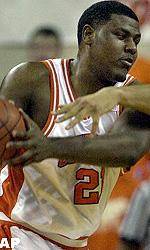 CLEMSON, S.C. – Juan Dixon sat at his locker, not sure whether to smile or sob.

“It’s been a tough week for us,” the Maryland guard said, “after the emotional win and the stuff with Coach.”

Moments after Maryland 87-73 victory over then-No. 1 Duke last Sunday, the Terrapins were hit with the news that coach Gary Williams father, William Williams, had died at age 85.

“Coach Williams is like family, for him to see his dad die and see the emotion on his face,” Dixon said. “You feel like crying.”

Dixon scored 14 of his 21 points in the second half as he and his teammates recovered from a sluggish start to beat Clemson 84-68 Wednesday night.

“The main thing is we wanted to come out here and not to lose the game,” Dixon said. “That’s what good teams, mature teams do, find a way to win.”

The Terrapins (22-3, 12-1 Atlantic Coast Conference) looked early like they were still caught between the emotional roller-coaster of beating Duke and seeing their coach in pain.

But Dixon, the ACC’s second-leading scorer, got hot in the second half and lifted Maryland to its ninth straight win over the Tigers (12-15, 3-11).

Tahj Holden’s tip-in gave Maryland the lead for good, 38-37. Dixon followed with a jumper to make it 42-39, then he added a driving layup and put the game away with consecutive 3-pointers to make it 61-49.

Lonny Baxter closed the run with a jam off a pass from Dixon.

Williams was absent from practice Tuesday for his father’s burial.

“It was tough for them to concentrate. I wasn’t at practice. That’s not normal,” Williams said. “I think they missed me yelling at them.”

“That’s quite an amazing accomplishment,” Williams said. “He plays hard and he’s been that way for years.”

“Up to about the 13-minute mark I felt good,” Clemson coach Larry Shyatt said. “It was 52-49 and I felt like we had withstood a pretty good Maryland run. But they got two or three easy lobs behind us.”

Maryland did not look like it did against Duke in the first half at Littlejohn Coliseum.

Dixon was 2-of-7 from the field, including 1-of-5 on 3-pointers. Steve Blake, who outplayed Duke’s Jason Williams on Sunday, had no points and four turnovers. The Terrapins, who are third in league in field goal percentage, missed 11 straight shots during one stretch.

Clemson used an 18-5 run to take a 27-20 lead with 5:38 remaining. Reserves Ryan Randle and Drew Nicholas, however, scored Maryland’s final nine points to make it 35-31 at halftime.

“The first half, maybe it looked like we weren’t prepared or ready for it, but we just weren’t making shots,” Blake said. “We played pretty good basketball.”

Blake’s first assist of the game made him Maryland’s career leader, breaking his tie with Keith Gatlin at 649. Blake, a junior, finished with nine assists and has 658.