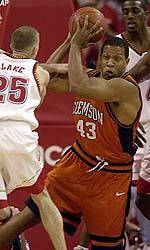 Tigers Downed By No. 14 Maryland

COLLEGE PARK, Md. (AP) – Maryland capped its first season in the Comcast Center with its best shooting performance of the year.

The 14th-ranked Terrapins pulled away from a five-point halftime lead to a 91-52 victory over Clemson on Tuesday night in their final home game of the season.

“I told them we had 20 minutes left to play at home,” coach Gary Williams said of his talk with his team leading just 36-31. “They responded unbelievably. … Our seniors had a lot put on them. People didn’t think they could be any good.”

Ryan Randle scored 18 points, Steve Blake added 14 and Drew Nicholas and Jamar Smith each had 13 for the Terrapins (18-7, 10-4 Atlantic Coast Conference), who have won four of five overall and beaten Clemson 11 straight times.

The defending national champions shot a season-best 63 percent from the field and took possession of second place in the ACC, percentage points behind No. 12 Wake Forest and one-half game ahead of No. 6 Duke.

“The past couple of years it’s been us and Duke – that’s been it,” senior forward Tahj Holden said. “This year you have three good teams. We’re still fighting for the league championship.”

Sharrod Ford had 12 points and 11 rebounds and Edward Scott added 11 points for the Tigers (15-9, 5-8), who tied a season low by shooting 31 percent and saw a three-game winning streak halted.

Maryland opened the second half with a 27-4 run to pull away from the five-point lead.

The Terrapins were 12-of-20 from 3-point range and moved Williams within one victory of 500 for his career. The Terrapins finished their inaugural season at Comcast Center with a 14-2 record.

“This is the last time around at home and we wanted to make this one special,” Nicholas said.

Coming off a 96-56 home rout of North CAROLINA on Saturday, Maryland recorded its largest margin of victory over Clemson since a 40-point win on Dec. 4, 1953. The Terrapins also whipped conference-leading Wake Forest at home on Feb. 17 and lost a road game to Duke two days later.

“Light years away,” Clemson coach Larry Shyatt said when asked how his Tigers matched up against the Terrapins.

Clemson, leading the ACC in field goal percentage, started 5-for-22 and had only one field goal in a 10:27 span midway through the first half.

The Tigers took an 11-9 lead with 15:05 left in the half, but Blake’s long 3-pointer started the Terrapins’ big run. Smith scored eight points during the burst, including a dunk off a baseline bounce pass from Blake.

Chey Christie helped the Tigers end the half on an 18-6 run, with Ray Henderson scoring the final two baskets on strong inside moves.

But Blake and Randle dominated the opening minutes of the second half, when Maryland quickly opened a 45-39 lead with a 13-2 run. Randle scored on two jams – one off an outlet pass from Nicholas – and Blake made three 3-pointers.

Blake’s 3s started a streak of six consecutive by the Terrapins, who hit eight of their first 10 shots from the field in the second half.

“We hit a tidal wave in the second half and a barrage of 3s,” Shyatt said. “The disappointing thing is they were open 3s. They made them. Clearly, it decided the game.”