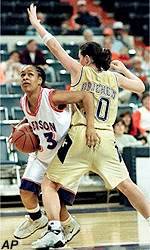 Leonard also finished the game 6-10 from the field and had five assists. Florida State was led in scoring by Molly Beal with 11 points. Katelyn Vujas had 10 for the Seminoles. Florida State’s Brooke Wyckoff finished the game with nine points and seven rebounds but went down with a knee injury with 16 minutes remaining. She did not return for the remainder of the game.

In the first half, Clemson opened the game with an 11-0 lead with 14:10 remaining. The Lady Tigers maintained this advantage, but Florida State came back from a 25-14 deficit and went on a 9-0 run and came within two points of Clemson’s lead 25-23 with 4:56 left. The Lady Tigers outscored the Seminoles 10-4 for the remainder of the half and took a 35-27 lead at intermission.

In the second half, Clemson had a 47-41 lead with 11:26 left to go in the game as Florida State’s April Traylor hit a three-point basket. From this point, Clemson went on a 18-4 run and built a 65-45 lead with 4:41 remaining. In this run, Leonard scored seven points in this Lady Tiger rally.

Florida State won the battle of the boards 40-27. Brooke Wyckoff, Katelyn Vujas, and Molly Beal all had seven rebounds each for the Seminoles.

Clemson will play North Carolina in the quarterfinals of the ACC Tournament on Saturday afternoon at 1:00 p.m. on Fox Sports South in the Lady Tigers’ next action.

“I thought our transition game today was the best it has been this season,” said Head Coach Jim Davis. “It is fitting that our seniors go out on a winning note. They are all winners. I thought our senior guard tandem of Amirah Leonard did a great job today.”