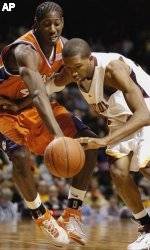 Vernon Hamilton added 13 points and Cliff Hammonds 12 for Clemson (8-0), which has won its first eight games for the third time in the past five years, including an 11-0 start last year. James Mays added 11 points and 10 rebounds while Trevor Booker also had 11 points.

Clemson held a 43-22 rebounding edge, including 24-5 on the offensive end.

The Gophers shot 72.7 percent in the first half but took only 22 shots, in part because of 12 first-half turnovers. Many of them were caused by an inability to get the ball up the court with the Tigers – particularly Mays and Hamilton – harassing Minnesota guards. Minnesota, which had 51 turnovers in its last three losses, finished with a season-high 24 turnovers.

Tied at 27 after a 3-point play by Smith, including a dunk between two Tigers, Clemson sank five 3-point baskets in the final five minutes for a 46-37 halftime lead. Powell hit two of the long-range shots. Clemson finished with seven 3-pointers in the first half and a season-high 12 for the game.

Back-to-back 3-pointers by Rivers and Sam Perry gave Clemson a 61-45 lead seven minutes into the second half.

Minnesota got within 14 points on a 3-pointer by McKenzie with 6:30 to play, but Hammonds answered for Clemson with a pair of layups off Gopher turnovers.