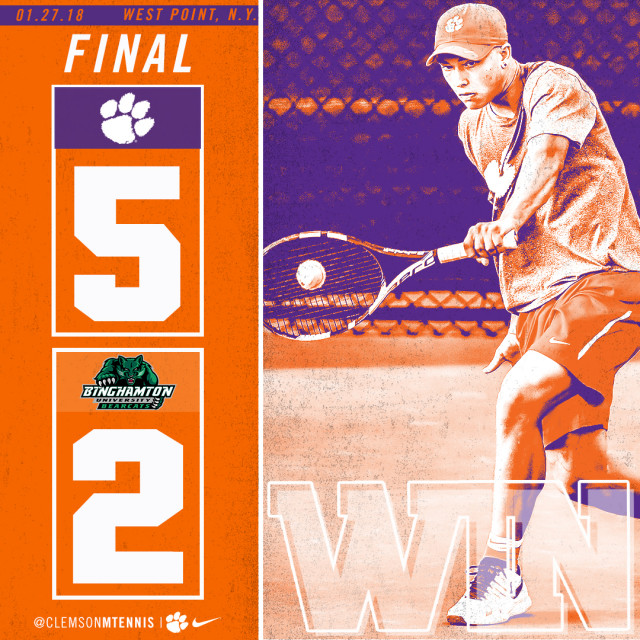 WEST POINT, N.Y. – The Clemson men’s tennis team defeated Binghamton, 5-2 on Saturday at Lichtenberg Tennis Center in West Point, N.Y. With the win, the Tigers improve to 3-1 on the season while the Bearcats drop to 0-2.

Binghamton took care of business in doubles with victories on courts one and three to clinch the doubles point. Sophomores Carlos Kelaidis and Marshall Dagostine won (6-3) on court two, but was not enough for the Tigers in doubles play.

The Tigers came out strong in singles, with Carlos Kelaidis clinching thepoint at No. 4 singles with a (6-3, 6-1) victory over Alejandro Pena. Marshall Dagostine was the next to clinch with a (6-1, 6-4) victory over Josh Druger of Binghamton at No. 6, giving Clemson a 2-1 lead.  The Bearcats tied the match up after, clinching the No. 5 singles point.

Sam Edwards dropped his first set (6-4) to Binghamton’s Kushaan Nath at No. 2 singles. The Suwanee, Ga. native, battled back to take the final two sets (6-4, 6-0) to clinch the point and give the Tigers a 3-2 match advantage.

– Simon Baudry, ranked 91st according to the final fall ITA Rankings, earned his second win of the season at No. 1 singles defeating Tiago Lourenco (4-6, 6-2, 6-1)

– This was the first meeting between the two programs.

– Baudry and Liu are on a four-match win streak.

Up Next
The Tigers are back in action Sunday, Feb. 4 as they host Cornel at the Michel Tennis Center in Greenville, S.C. The match is set to begin at 10 a.m.

Head Coach John Boetsch Quotes “Im really proud of how our guys responded after a tough loss last weekend and a quick turnaround to come up and play on the road. We focused on taking care of the lead and we really made strides in that area. Both wins were a team effort with every guy making a positive impact. I was very pleased with how we bounced back after losing the doubles point against Binghamton. Thank you to Army Head Coach and Clemson Tennis Alum Jim Poling for hosting us and showing our team around campus.”