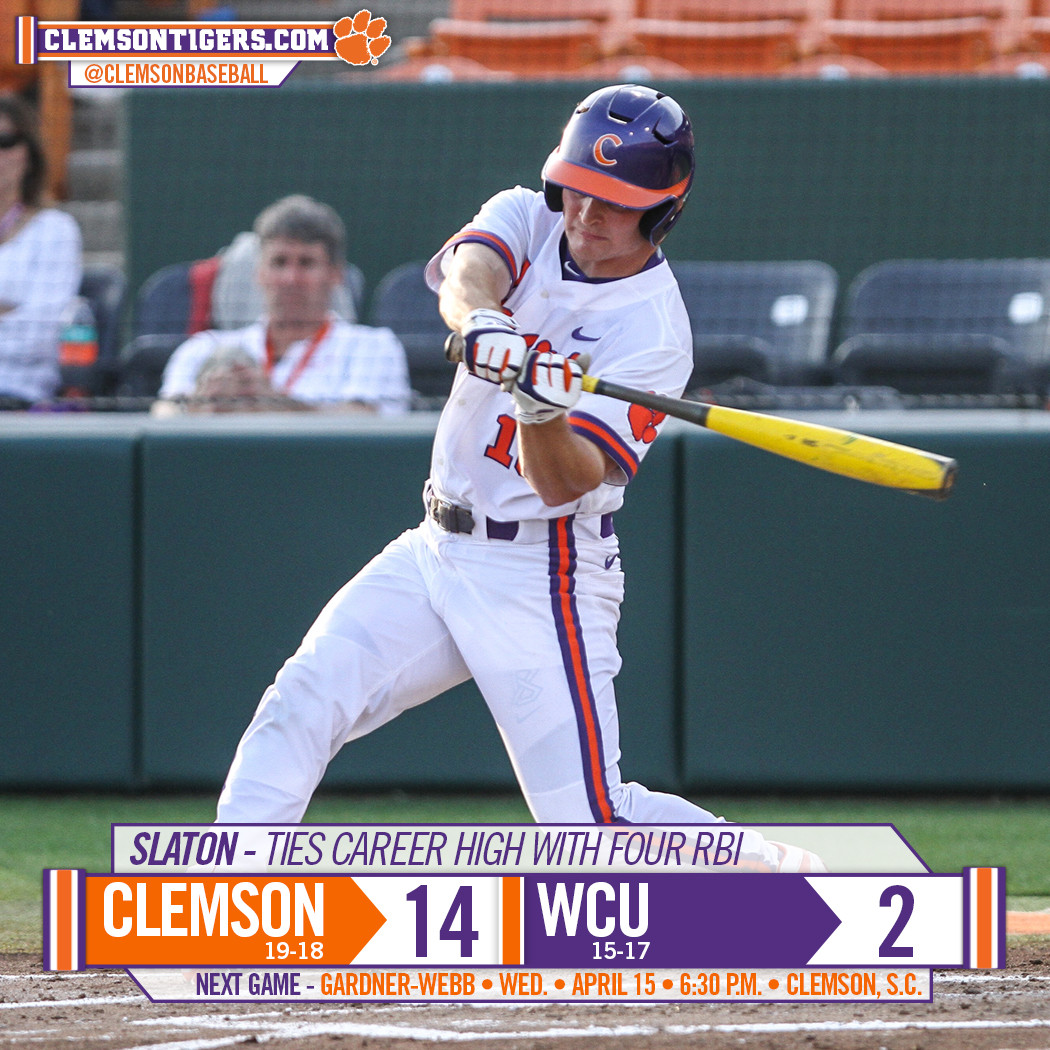 CLEMSON, S.C. – Clemson scored seven runs in the fourth inning en route to a 14-2 victory over Western Carolina at Doug Kingsmore Stadium on Tuesday night. The Tigers, who won the home-and-home season series 2-0, improved to 19-18. The Catamounts dropped to 15-17.

Clemson scored three runs in the second inning, highlighted by Tyler Slaton’s run-scoring single. After the Tigers scored a run in the third inning, they erupted for seven runs on three hits and three Catamount errors in the fourth inning to take a commanding 11-0 lead. Tyler Krieger and Chris Okey both belted two-run singles in the frame. Clemson added three runs in the fifth inning.

Reed Rohlman extended hit hitting streak to 10 games by going 2-for-2 with three runs and two walks in Clemson’s 11-hit attack. Okey went 3-for-4 with two RBIs and three runs, Glenn Batson went 2-for-4 with a double and two RBIs and Slaton tied his career high with four RBIs.

Tiger starter Jake Long (1-0) earned the win by allowing just one hit, one run and one walk with five strikeouts in 6.0 innings pitched. He did not allow a hit until Austin Atwell’s solo homer with one out in the sixth inning. Long held Western Carolina, who entered the game 30th in the nation in runs per game (6.9) and 35th in batting average (.297), in check. Catamount starter Brendan Nail (2-3) suffered the loss.

“We played well,” said Head Coach Jack Leggett. “We played well against them up there. They are a good baseball team. They hit us on a couple of good nights, which shows me we still have a chance here. We just have to keep playing well.

“We have 19 games left and we just made a commitment earlier to make it our best 20 all year long. Jake Long was really good for us tonight. We were really good offensively and played some good defense. We also got to play some guys who haven’t gotten a chance to play in awhile. So it was a good night for us.”

Clemson hosts Gardner-Webb on Wednesday at 6:30 p.m. at Doug Kingsmore Stadium. It’s BOGO Wednesday, as fans can purchase one adult-seat ticket and receive an additional reserved-seat ticket free of charge.