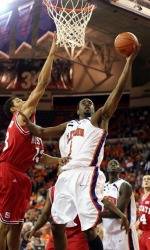  Clemson junior K.C. Rivers needs just eight points to reach the 1000 mark for his career. When he does he will become just the 16th player in school history to reach the mark by the end of his junior year.

 Clemson has three players in its starting lineup from the state of North Carolina. The three playes are K.C. Rivers (Charlotte) and Demontez Stitt (Matthews).

 Cliff Hammonds needs just five steals to reach 200 for his career. When he does he will become just the sixth player in ACC history with 1200 points, 400 rebounds, 400 assists and 200 steals. He also has 219 career three-point goals, second in Clemson history. Hammonds has made at least on three-point goal in 44 straight games.

 K.C. Rivers on Dec. 3). It is the first year since 1992-93 that Clemson has had two different players win ACC Player of the Week honors.

 Clemson has a 4-6 record against Duke over the years when both teams are ranked in the top 25 of at least one poll entering the game.

 Clemson is ranked in the top 25 of both polls for the ninth straight week, tied for the third longest streak in Clemson history.