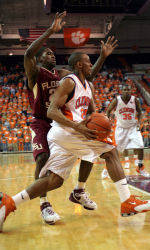 Quick Facts  Clemson has lost 20 consecutive games to Duke. The Tigers last win over the Blue Devils took place on January 7, 1997, an 86-82 win in overtime. At the time it gave Clemson four wins in five games against the Blue Devils.

 It should be pointed out that Duke has been ranked in the top three in the nation entering 15 of those 20 Clemson losses and in the top 10 in all 20 games. This will mark the first time Clemson has faced a Duke team ranked outside the top 10 since Feb. 3, 1996.

 Clemson’s 68-66 loss at Duke earlier this year was the closest Clemson has come to beating Duke since a 66-64 loss to the Blue Devils in the 1998 ACC Tournament.

 Clemson has beaten a top 20 Duke team coached by Mike Krzyzewski six times, including the win over a 10th ranked Duke team in 1996-97.

 The Duke game will be the first of two games in 38 hours. The Tigers will play at Boston College on Saturday afternoon at 1:00 PM.

 Clemson point guard Vernon Hamilton has scored 52 points in his last two games against Duke. He had a career high 31 points against the Blue Devils at Clemson last year and 21 points at Duke in the meeting earlier this year. Those are two of his top five scoring games in ACC play in his career.

 Clemson will face Duke coming off a 16-point loss to Maryland. Clemson is 5-1 the last three years coming off a loss of 16 points or more.

 Cliff Hammonds had a career high 10 assists against Maryland. In fact it was the most assists by a Clemson player in the Oliver Purnell era. He needs five assists vs. Duke to reach 300 for his career. Hammonds has not had more turnovers than assists in each of his last 22 games.