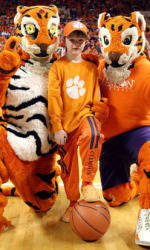 McCarter, a resident of Greenville, was dressed in his best Clemson gear. All winners of the Fan of the Game contest throughout the season were entered into the drawing, and McCarter was chosen to win a shopping spree from Bi-Lo and rights to be called the Bi-Lo Solid Orange Fan of the Year.