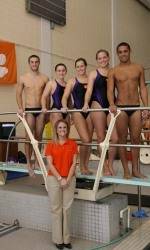 Tiger Divers Wrap Up Season During the Weekend

AUBURN, AL – Four Tiger Divers competed in the one and three meter events for the right to pass on to the NCAA Diving Championships during the weekend.

Senior Dani Kazilionis just missed the cut, finishing 21st with a 229.25 on the one-meter boards, while Stephanie Fura notched a 204.45 in the event.

On the three-meter boards, Kazilionis put in a 212.25, while Fura tallied 211.35. Neither Tiger was able to secure a spot at the Championships, having to compete against a tough field of over 40 divers from around the region.

On the men’s side, both David Giambra and Marco Raye got valuable experience. Giambra put in scores of 254.65 and 246.55 on the one and three-meter boards, respectively. Raye scored 206.20 and 219.75 as well. Both Divers were unable to qualify, but the sophomores will be able to build on the experince for next season.

Four Women will travel to Columbus from March 20-22 for the NCAA Swimming and Diving Championships to compete in various swimming events.