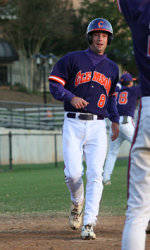 Freshmen Brad Chalk and Taylor Harbin had three hits apiece to lead a 14-hit performance in Clemson’s 14-3 win at Maryland in front of 308 fans at Shipley Field on Friday night. The Tigers scored at least two runs in five different innings, and improved to 10-9 overall and 3-1 in the ACC. Maryland, who committed six errors in the game, fell to 11-12 overall, 3-7 in ACC play.

Two of Harbin’s three hits were doubles, as he upped his season total to 13 in just 19 games. The Travelers Rest, SC native also drove in four runs and scored three more. Chalk was 3-for-4 with an RBI and four runs scored. The Greer, SC native reached base safely in all five of his plate appearances, including one on a walk and another time on an error. Travis Storrer added two hits and three RBIs, and Adrian Casanova had two hits and two runs scored as well. Four of Maryland’s six hits came in the first three innings, as Nick Jowers had a team-high two singles in four at-bats.

After a rough second inning, starter Josh Cribb (2-2) settled down and allowed just five hits, three runs, and one walk while striking out seven in 7.0 innings to earn the win. Daniel Moskos and Drew Fiorenza eached pitched an inning to close out the game. Terrapin starter Chris Clem (1-3) allowed eight earned runs on 11 hits in 6.0 innings and suffered the loss.

The Tigers jumped out to a 2-0 lead in the first inning thanks to two freshmen. Chalk lined a one-out single to right field and scored on a double high off the wall in left-center by Harbin. After advancing to third on a groundout, Harbin scored on a wild pitch.

The Terrapins responded with three runs in the second inning to take the lead. Will Frazier led off with a single through the left side and went to second when Elliot Singletary was hit by a pitch. Jason Von Behren then singled through the left side to bring home Frazier, then Singletary and Von Behren moved up a base on a passed ball. Bobby Ryan’s groundout to second plated Singletary, and Jowers bounced a single past Herman Demmink at third base to score Von Behren.

Thanks to two Terrapin errors, Clemson took a 4-3 lead in the third inning. Demmink walked with one out then went to second on a bunt single by Chalk. On the play, Demmink rounded second base too hard, and Clem had him caught off too far. But Clem’s throw to second was low and went into centerfield, allowing Demmink to advance to third base. Tyler Colvin then ripped a hard grounder under the glove and through the legs of second-baseman Joe Palumbo, allowing Demmink to score. Storrer then lifted a soft single to left field to bring home Chalk from second base.

Clemson added to its lead in the fourth inning thanks in part to the bottom of the lineup. Andy D’Alessio hit the first pitch off the wall in centerfield and scored two batters later on Casanova’s line-drive single to left field. Two batters later and with two outs, Palumbo’s throw to first base on a ground ball by Chalk was errant, allowing another run to score. It was the fourth Terrapin error through four innings.

Two more errors in the top of the fifth inning looked like they would lead to more runs, but a nice defensive play kept the Terrapins within three runs. Colvin reached when Palumbo booted a slow grounder, his third error of the game. Colvin then went all the way to third base with no outs on a wild throw on a failed pickoff attempt by Clem, his second error of the game. But Clem got Storrer to ground out for out #1 and Kris Harvey to strike out looking for out #2. D’Alessio then ripped a ball that was headed down the right-field line, but first-baseman Jordan Wilson made a diving stop to rob D’Alessio of a base hit.

Clemson added to its lead with five runs in the sixth inning, this time without the help of any errors. Casanova reached on an infield single with one out and came all the way around to score on Chalk’s soft hit to left-center. Harbin followed with a solid single to left to bring home Chalk from second base. After Colvin walked, Storrer laced a two-run double just inside the third-base bag. Harvey followed with another line-drive single to left field to score Storrer, giving the Tigers an 11-3 lead.

The Tigers added three more runs in the seventh inning to put the game out of reach. Walks by Stan Widmann and Chalk set up a two-run double off the left-field fence by Harbin, his second two-bagger of the game. Colvin followed with a single up the middle to plate Harbin.

The win was Head Coach Jack Leggett’s 899th of his career. Clemson and Maryland will a doubleheader Saturday starting at 4:00 PM due to the threat of inclement weather on Sunday.