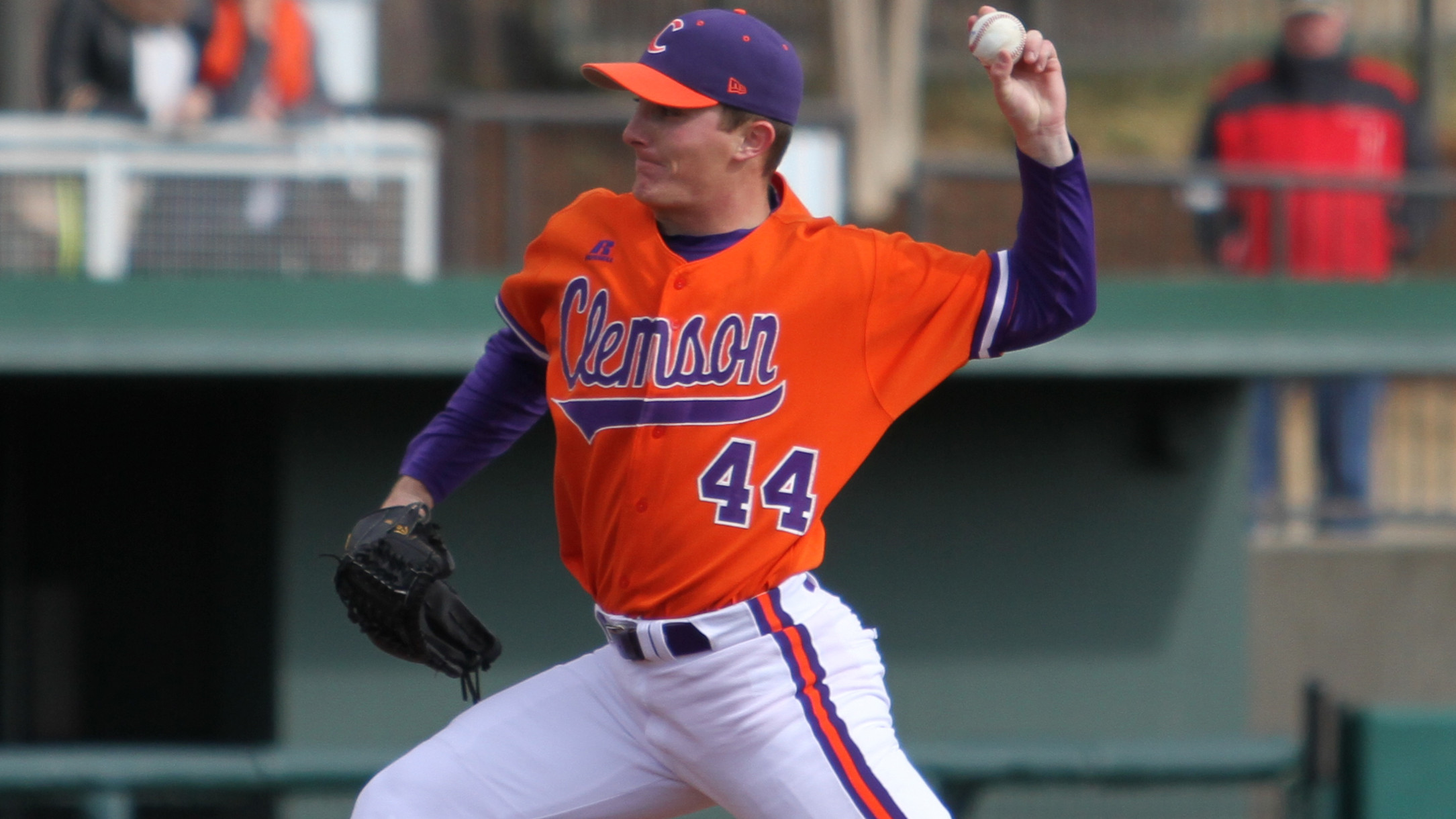 Clemson vs. WinthropClemson (5-1) will host Winthrop (2-5) on Tuesday at Doug Kingsmore Stadium. First pitch is scheduled for 4:00 PM. The game will be available live via webcast on TigerCast at ClemsonTigers.com. The game will also be broadcast live on the radio by WCCP (104.9 FM) out of Clemson. Live stats will be available at ClemsonTigers.com as well.

The SeriesClemson and Winthrop have met 22 times on the diamond, with the Tigers holding an 18-4 lead in the series that dates to 1981. The last meeting came on April 3, 2012 at Doug Kingsmore Stadium. Clemson was victorious 11-0 behind Daniel Gossett‘s 7.0 innings pitched of three-hit ball with 13 strikeouts.

The Starting PitchersWinthrop will start freshman lefthander Sam Kmiec (0-1, 2.08 ERA) on the mound. The Middletown, DE native has made five relief appearances for a total of 4.1 innings pitched. He has allowed six hits (.353 opponents’ batting average) and no walks with two strikeouts.

The Tigers will counter with freshman lefthander Matthew Crownover (0-0, 27.00 ERA) on Tuesday. The Ringgold, GA native has made one relief appearance for a total of 0.2 innings pitched. He has surrendered two hits (.500 opponents’ batting average) and one walk with no strikeouts.

Crownover will be the first Tiger lefthander to start a game on the mound since April 10, 2011 against Maryland, when lefthander Will Lamb started in the Terrapins’ 7-6 win at Doug Kingsmore Stadium. Clemson has gone 101 games in a row with starting a righthander on the mound.

The EaglesWinthrop, led by third-year Head Coach Tom Riginos, enters Tuesday’s game at Clemson with a 2-5 overall record after winning one of four games at home against Delaware State and Eastern Kentucky over the weekend. The Eagles are 0-1 on opponents’ home fields in 2013.

Winthrop is averaging 3.4 runs per game and hitting .248 with a .316 slugging percentage and .338 on-base percentage thanks to 28 walks and four hit-by-pitches against 45 strikeouts. The team has also totaled 13 doubles, one home run, and two stolen bases in three attempts.

Cody Dolan and Leighton Daniels are both 11-for-27 (.407) to lead the squad. Dolan has the team’s lone long ball, while Matt Lobacz is hitting .400 with a team-high four RBIs. Lobacz also has a team-high .531 on-base percentage thanks to seven walks against only one strikeout.

The pitching staff has a 3.75 ERA and .248 opponents’ batting average along with 68 strikeouts against 24 walks in 60.0 innings pitched. Senior righthander Eric Ruth has the team’s lone save and has allowed just one hit, no runs, and three walks with seven strikeouts in 4.0 innings pitched over three relief appearances. Winthrop, who has allowed 22 steals in 24 attempts, is fielding at a .961 clip as well.

The TigersClemson enters Tuesday’s game against Winthrop with a 5-1 overall record after sweeping Wright State by a combined score of 18-3 over the weekend. All six of Clemson’s games have been at Doug Kingsmore Stadium.

The Tigers are averaging 5.7 runs per game and hitting .292 with a .400 slugging percentage and .365 on-base percentage thanks to 20 walks and three hit-by-pitches against 26 strikeouts. Clemson has also totaled 15 doubles, two homers, and nine stolen bases in 13 attempts.

Steve Wilkerson leads the team with a .478 batting average, two doubles, one homer, seven RBIs, and three steals. Steven Duggar is hitting .350 with three doubles, while Garrett Boulware is batting .333. Shane Kennedy leads the team in RBIs (8) and has hit one home run as well.

The pitching staff has a 2.50 ERA and .253 opponents’ batting average in 54.0 innings pitched. The staff has allowed 18 walks against 40 strikeouts, good for a 2.23 strikeout-to-walk ratio. Junior righty Matt Campbell has both of Clemson’s saves. The Tigers are fielding at a .984 clip as well.

Firth Climbing Clemson Career ChartsSenior righthander Scott Firth (Buffalo Grove, IL) has seen action as both a starter and reliever during his four seasons at Clemson. This season, he has moved into the rotation for the Sunday games. In 15.0 innings pitched over two starts, Firth is 2-0 with an 0.60 ERA and a .149 opponents’ batting average along with nine strikeouts against only three walks.