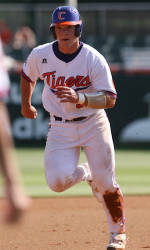 Clemson vs. Presbyterian Clemson (33-19), ranked as high as #22 in the nation, will host Presbyterian (13-37) on Tuesday at Doug Kingsmore Stadium. First pitch is scheduled for 6:30 PM. The game will be broadcast live on the radio by WCCP (104.9 FM) out of Clemson and can be heard live on the internet at ClemsonTigers.com as well.

The Series Clemson and Presbyterian have met 77 times on the diamond, with Clemson holding a 58-19 lead in the series dating to 1906. The two teams last met at Doug Kingsmore Stadium on March 17, 2009. The Tigers were victorious 8-0. On April 23, 2008 at Fluor Field in Greenville, SC, the Tigers topped Presbyterian 12-7. Prior to that game, the two teams had not met since 1950, when Clemson won both meetings by scores of 15-2 at Presbyterian and 11-10 (10 innings) in Tigertown.

The Starting Pitchers The Blue Hose will start senior righty Jesse Harmon (2-7, 7.52 ERA). The Newberry, SC native has made 12 starts and five relief appearances for a total of 67.0 innings pitched. He has allowed 91 hits (.332 opponents’ batting average) and 22 walks with 64 strikeouts.

The Tigers will counter with freshman righty Scott Firth (1-1, 3.00 ERA) on Tuesday. The Buffalo Grove, IL native has made 10 relief appearances and two starts for a total of 21.0 innings pitched. He has yielded 26 hits (.292 opponents’ batting average) and 11 walks with 17 strikeouts.

The Blue Hose Presbyterian, led by sixth-year Head Coach Elton Pollock, enters Tuesday’s game at #22 Clemson with a 13-37 overall record and 5-19 Big South Conference mark after winning one of three games over High Point at home over the weekend. Presbyterian, who snapped a seven-game losing streak with Sunday’s win over High Point, is 4-21 on opponents’ home fields in 2010.

Mack Hite his hitting a team-high .315, while Matt Hill is batting .314. Tony Micklon is hitting .299 with seven homers, 12 doubles, and 35 RBIs. Jesse Harmon has added a team-high eight stolen bases.

The pitching staff has a 7.91 ERA and .350 opponents’ batting average along with 284 strikeouts against 167 walks in 432.1 innings pitched. Harmon, a senior righthander, has three of the team’s five saves along with 64 strikeouts against only 22 walks in 17 appearances (12 starts). Presbyterian is fielding at a .958 clip as well.

The Tigers Clemson, ranked as high as #22 in the nation, enters Tuesday’s game against Presbyterian with a 33-19 overall record and 15-12 ACC mark after winning one of three games at Wake Forest last weekend. The Tigers have also won eight of their last 10 games and are 23-8 at home in 2010.

The pitching staff has a 4.69 ERA and .278 opponents’ batting average. The staff has allowed 173 walks against 350 strikeouts. Righthanders Alex Frederick, Tomas Cruz, and Jonathan Meyer all have two saves apiece. The Tigers are fielding at a .961 clip as well.

Polls The Tigers remained at #22 in the Sports Weekly coaches poll this week after going 2-2 last week. The Tigers are unranked in both the Baseball America and Collegiate Baseball polls. With Clemson’s top-25 ranking this week, it marks the 32nd week in a row the Tigers have been ranked in the top 25 of at least one of the three major polls dating to the start of 2009.

ACC Standings The Tigers are in second place in the ACC Atlantic Division standings with a 15-12 league record. In the division, Florida State is in first place with an 18-9 record and is three games ahead of the Tigers. The two division rivals will meet this weekend to close the regular season and the Seminoles need just one victory in the series to win the division outright.

With Virginia’s walkoff win over the Tar Heels on Sunday, the Tigers clinched a spot in the ACC Tourney. Depending on this weekend’s ACC results, the Tigers’ possible ACC Tournament seeds are #2, #5, #6, or #7.

Scoring Streak Clemson has scored at least one run in 119 consecutive games dating to 2008. It is the sixth-longest streak in Tiger history. The school record for consecutive games without being shut out is 232 (set between 1984-86). Clemson’s current streak is the eighth of 100 games or more in school history.

Miller Among Best at the Plate in ACC Games Brad Miller is one of the ACC’s best hitters in league games. In 27 ACC regular-season games this season, he is hitting a team-best .382 with four homers, two triples, five doubles, 16 RBIs, 25 runs, a team-high 28 walks, a team-best .525 on-base percentage, and four steals. In ACC regular-season games, Miller is first in the league in walks, second in on-base percentage, and third in batting average.

Demon Deacons Win Series 2-1 in Winston-Salem Wake Forest took two of three games over #22 Clemson by a combined score of 25-24 at Wake Forest Baseball Park from May 14-16. Wake Forest outhit the Tigers .337 to .245 and totaled 10 doubles along with five home runs, while Clemson also hit five long balls. Brad Miller led Clemson at the plate by going 5-for-10 with two homers, four runs, and three walks. The Tigers committed just three errors and had a .972 fielding percentage.

In game-one on May 14, Wake Forest scored eight runs in the fourth inning to defeat Clemson 9-5. The Demon Deacons totaled six hits in the fourth, highlighted by Mac Wiliamson’s three-run homer to give them the lead for good. Williamson added a solo homer in the fifth inning. Meanwhile, starter Austin Stadler struck out 11 batters in 6.1 innings pitched and allowed just six hits and one run to earn the win. John Hinson and Miller hit home runs in the ninth inning, but they were not enough to overcome the deficit. Clemson put more runners on base (17-15), but the Tigers stranded 11 on base against Wake Forest’s five.

In game-two on May 15, Clemson scored 10 runs in the fifth inning en route to a 17-5 win over Wake Forest. The Tigers took an early 3-0 lead on home runs by Kyle Parker and Miller, then the Demon Deacons scored three runs in the fourth inning to tie the score. But Clemson erupted for 10 runs on seven hits in the fifth inning and cruised to the win. Jeff Schaus went 3-for-5 with a triple, three RBIs, three runs, and a walk to lead Clemson’s 14-hit attack. Starter Scott Weismann pitched 5.0 innings to earn the victory.

In game-three on May 16, every Demon Deacon starter had at least one hit and Tim Cooney tossed 8.0 strong innings to lead Wake Forest to an 11-2 win over Clemson. Cooney, a freshman lefthander, allowed just four hits and two runs to shut down the Tiger offense. Meanwhile, Wake Forest’s offense posted eight combined runs in the first four innings. Ryan Semeniuk had a game-high three RBIs along with two hits, Mark Rhine totaled a game-high three runs, and Carlos Lopez added a two-run homer for the Demon Deacons, who had 14 hits. Miller had two of Clemson’s four hits. It was the Tigers’ worst loss to Wake Forest since 2001.