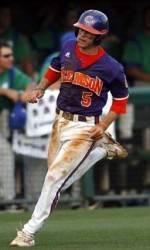 Clemson vs. Maryland Clemson (28-17, 11-10 ACC), ranked as high as #24 in the nation, will play at Maryland (16-33, 4-20 ACC entering Wednesday night’s game at Liberty) in a three-game series at Bob Smith Stadium this weekend. Game times are 6:00 PM (Friday), 1:00 PM (Saturday), and 1:00 PM (Sunday). All three games will be broadcast live on the radio by Clemson Tiger Sports Network. Live stats will also be available at ClemsonTigers.com for all three games.

The Series Clemson and Maryland have met 150 times, with the Tigers holding a 111-39 lead in the series dating back to the 1923 season. The two teams have faced each other at least one time every year since 1954.

In the three-game series at Doug Kingsmore Stadium in 2009, Clemson won the first two games by scores of 11-2 and 7-4 before the Terrapins won the series-finale 8-6. Two years ago at College Park, Clemson won the first and third games by scores of 2-1 and 6-2, respectively, while Maryland won game-two 5-3. The Tigers also played at Maryland in 2007, as the Terrapins won two of three games in that series.

The Tigers hold a 37-28 lead all-time in games played at Maryland and a 98-36 advantage in ACC regular-season games. Head Coach Jack Leggett is 42-8 against Maryland as Clemson’s head coach, including 16-7 at Bob Smith Stadium.

The Starting Pitchers Maryland’s starting pitchers for all three games have yet to be determined.

Clemson will start sophomore righty Scott Weismann (4-2, 4.60 ERA) on Saturday. The Boxborough, MA native has made 11 starts for a total of 62.2 innings pitched. He has given up 64 hits (.263 opponents’ batting average) and 19 walks with 54 strikeouts.

The Tigers’ starter for game-three on Sunday has yet to be determined.

The Terrapins Maryland, led by first-year Head Coach Erik Bakich, enters Wednesday’s game at Liberty with a 16-33 overall record and 4-20 ACC mark after winning at Towson 10-5 on Tuesday. The Terrapins, who are 11-17 at home, were also swept at Miami (FL) last weekend. Bakich was a volunteer assistant at Clemson in 2002 when the Tigers played in the College World Series.

Maryland is averaging 4.5 runs per game and hitting .257 with a .360 slugging percentage and .341 on-base percentage. The team has totaled 82 doubles, two triples, 26 home runs, and 111 stolen bases. The Terrapins are tied for eighth in the nation in steals and are sixth in sacrifice bunts (52).

The pitching staff has a 6.97 ERA and .307 opponents’ batting average along with 409 strikeouts against 215 walks in 429.0 innings pitched. Senior righthander Dan Gentzler has seven of the team’s nine saves along with 28 strikeouts against only seven walks in 28.1 innings pitched over 23 relief appearances. The Terrapins are fielding at a .960 clip.

The Tigers Clemson, ranked as high as #24 in the nation, enters the series at Maryland with a 28-17 overall record and 11-10 ACC mark after winning the final three games of the four-game series at home against Florida Gulf Coast from Saturday to Tuesday. The Tigers are also 4-8 on opponents’ home fields in 2010.

Kyle Parker leads the team with a .377 batting average along with 16 homers, seven doubles, 45 RBIs, 53 runs, and a .503 on-base percentage in 42 games. John Hinson is batting .364 with nine homers, 50 RBIs, and a team-high 17 stolen bases. Jeff Schaus has added eight long balls and a team-high 57 RBIs, while Mike Freeman is riding a 13-game hitting streak.

The pitching staff has a 4.56 ERA and .273 opponents’ batting average. The staff has allowed 149 walks against 315 strikeouts. Righthanders Alex Frederick, Tomas Cruz, and Jonathan Meyer all have two saves apiece. The Tigers are fielding at a .961 clip as well.

The Tigers have one player who hails from the state of Maryland, Kevin Brady (Gaithersburg).

Worth Noting  Clemson is 20-1 when it outhits its opponent and 4-13 when it gets outhit.

Polls The Tigers moved up one spot to #24 in the Sports Weekly coaches poll this week after going 2-1 in three games last week. The Tigers are unranked in both the Baseball America and Collegiate Baseball polls. With Clemson’s top-25 ranking this week, it marks the 30th week in a row the Tigers have been ranked in the top 25 of at least one of the three major polls dating to the start of the 2009 season.

ACC Standings The Tigers are in second place in the ACC Atlantic Division standings with an 11-10 league record. In the division, Florida State is in first place with a 14-7 record, while Boston College is third at 12-12. N.C. State is fourth at 11-13, while Wake Forest is fifth at 4-17 and Maryland is sixth (4-20). Virginia and Miami (FL) are tied for the overall ACC lead at 18-6, while Georgia Tech is third at 17-7. In the overall ACC standings, Clemson is in sixth place.

One thing that does not show up in the stat column is the number of highlight-reel plays he has made on defense at second base this season. Freeman, who is one of Clemson’s best defensive second-baseman in recent history, has a solid .966 fielding percentage and is a big reason the Tigers have turned 50 double plays in 45 games in 2010.

Benson is in his first year with the Arizona Diamondbacks after playing previously with the Pittsburgh Pirates, New York Mets, Baltimore Orioles, and Texas Rangers. He is a veteran of nine Major League seasons. Benson was the 1996 National Player-of-the-Year when he led Clemson to the College World Series. He finished his Tiger career with 29 wins and 356 strikeouts, as both are in the top five in Tiger history.

Baker is in his sixth season in the Majors and second year with the Chicago Cubs. Baker, who is tied for the all-time Tiger record with 59 career homers, played for the Rockies in the 2007 World Series.

Colvin saw limited action with the Chicago Cubs in the latter stages of the 2009 season and is in his second season in the Majors.

Tigers Win Three Over Eagles in Four-Game Series Clemson, ranked #25 in the first three games and #24 in the last game, won three of four games over Florida Gulf Coast by a combined score of 32-15 at Doug Kingsmore Stadium from May 1-4. Clemson outhit the Eagles .333 to .290 and totaled 16 extra-base hits along with being 12-12 on steals. Mike Freeman went 8-for-17 with two homers, two doubles, eight RBIs, six runs, three walks, and two steals in the series. The Tiger pitching staff had a 3.25 ERA as well.

In game-one on May 1, Luke Smierciak’s two-run homer in the eighth inning propelled Florida Gulf Coast to a 4-2 win over Clemson. Tim Roberson’s two-run homer in the top of the fourth gave the Eagles a 2-0 lead, but Brad Miller hit a solo homer in the bottom of the fourth and Freeman’s run-scoring single in the fifth tied the score. Clemson put runners on second and third in the ninth inning, but Freeman grounded out to end the game. Chris Sale tossed 8.0 innings, allowing four hits, two runs, and two walks with 10 strikeouts to earn the win. Clemson stranded nine runners on base, including six in scoring position.

In game-two on May 2, which was the first game of a doubleheader, Clemson scored in six of its eight innings at the plate in its 9-3 win over Florida Gulf Coast. The Tigers took a 4-2 lead with two runs in the third inning and led the rest of the way. Freeman went 2-for-4 with a homer, double, two RBIs, and two runs, while Shaffer added a pinch-hit home run for the Tigers, who outhit Florida Gulf Coast 12-9. Scott Weismann pitched the first 5.0 innings to earn the win, then Tomas Cruz pitched 4.0 scoreless innings in relief to record the save. It was also Jack Leggett’s 750th career victory as Clemson’s head coach.

In game-three on May 2, which was the second game of a doubleheader, Jeff Schaus two-out single scored the go-ahead run in Clemson’s 7-6 win over Florida Gulf Coast. The Tigers scored three runs in the seventh inning to take a 5-4 lead, but an error helped the Eagles score two runs in the top of the eighth to regain the lead. Alex Frederick retired all five batters he faced to earn the win. Freeman went 3-for-3 with two steals, while Schaus went 3-for-4 with three RBIs. Clemson outhit the Eagles 15-12 , had six steals, and snapped its 12-game losing streak in games decided by two runs or less.

In game-four on May 4, Clemson scored seven two-out runs in the second inning on its way to a 14-2 victory over Florida Gulf Coast. The Tigers used three walks to set up five two-out hits, including a grand slam by Freeman, in Clemson’s seven-run second inning. The Tigers outhit the Eagles 15-6 and walked seven times. Kyle Parker went 3-for-4 with two doubles and two RBIs, while Miller added three hits. Frederick pitched 5.0 innings in his first start as a Tiger to earn the win. He allowed just four hits, one earned run, and two walks with six strikeouts.