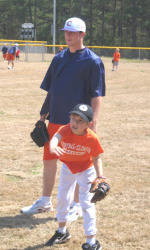 On Saturday, March 22, 2008, members of the Clemson baseball team helped dedicate the new baseball fields at the city’s Nettles Park addition. Seven team members put on a skills clinic for 21 children in attendance at the festivities.

The ceremonies began with the dedication and the unveiling of the names of each field. Following the opening ceremonies, the players worked with the kids on basic fundamentals of pitching as well as infield and outfield skills. The session wrapped up with a baserunning competition and a question and answer session for the kids with the Tiger athletes.