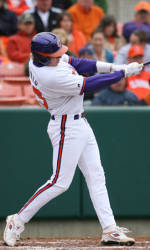 Wilson Boyd, Ben Paulsen, and Kyle Parker each hit home runs to highlight Clemson’s 13-5 victory over Virginia Tech on Friday in game-one of a three-game series in front of 4,885 fans at Doug Kingsmore Stadium. The Tigers improved to 22-20-1 overall and 8-13-1 in the ACC, while the Hokies fell to 18-24 overall and 4-18 in conference play.

The Tigers took an early 4-0 lead in the first. Mike Freeman reached on a two-base throwing error by shortstop Tony Balisteri. Jeff Schaus then put runners on the corners with a single through the right side. Boyd followed with an opposite-field, three-run homer over the left-field fence. It was his sixth homer of the year and first since the Tigers faced College of Charleston in the fifth game of the season on February 29. Paulsen then doubled to right before third-baseman Michael Seaborn’s throwing error on Parker’s grounder allowed him to score.

Clemson scored a run in the fourth, as Schaus drew a two-out walk before Boyd drove him in with a double to left.

The Tigers charged ahead with three more runs in the fifth. Paulsen led off the frame with a solo home run to center on an 0-2 pitch. It was his 12th long ball of the season. Parker and Chris Epps then drew back-to-back walks. The bases became loaded as Doug Hogan reached on a bunt to the pitcher and Parker reached third on a throwing error by pitcher Kyle Cichy. Parker then came around to score on a fielder’s choice by John Hinson. Hinson and Epps then executed a double steal, as Epps crossed the plate to increase the Tigers’ lead to 8-0.

The Hokies’ four-run sixth inning was highlighted by O’Brien’s sixth homer of the year, a two-run shot to right.

Virginia Tech cut the lead to 8-5 in the seventh, as Bumbry led off with a solo homer to right. It marked his fourth home run of the season.

The Tigers answered with a run of their own in the bottom of the seventh inning. Epps led off with a walk, stole second, and scored on Stan Widmann’s single through the left side.

Parker highlighted a four-run eighth inning with his seventh long ball of the season, a three-run shot to right.

Clemson and Virginia Tech will play game-two of the three-game series on Saturday at 7:00 PM.