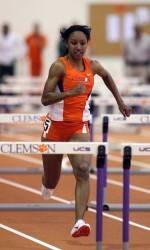 CLEMSON, SC – The U.S. Track & Field and Cross Country Coaches Association released the official list of 2010 indoor collegiate All-Americans on Monday. Clemson athletes earned two in men’s track & field and 10 in the women’s competition, giving the Tiger program a total of 12 All-America honors from the past weekend at the NCAA Indoor Championships. It put a close on an impressive indoor season for the program. Clemson’s women tied for seventh place as a team over the weekend, the program’s best indoor finish since 2001.

Gisele Oliveira as the only Clemson females to be named All-American in both the long jump and triple jump.

The remainder of the 4x400m relay also earned All-America status in their first trip to the NCAA Championships. Sonni Austin, Jasmine Edgerson and Brittany Pringley – like Rollins, all freshmen – established a Clemson record in the mile relay with a superb time of 3:33.93 in the opening heat Saturday evening.

Liane Weber earned her second straight All-America honor in the pentathlon. The senior from Wangen, Germany was fifth in the event, a one-spot improvement from the 2009 season. She is the only multi-event All-American in Clemson women’s track & field history.

Two veterans, Patricia Mamona and Kim Ruck, earned their respective first All-America certificates last weekend. Mamona was the NCAA’s runner-up in the triple jump after breaking Oliveira’s school record. The Portuguese sensation put together a leap of 45’5.25″ in the finals. Ruck earned All-America status in her first-ever trip to the NCAA Championships. The distance standout was seventh in the 5K, with a school-record time of 16:01.24.

Two members from the men’s team competed last weekend at the NCAA Indoor Championships, and both walked away with All-America honors for the first time. Ryan Koontz earned the nod in 2007. Roy Cheney in 2004. Clemson now has produced at least one All-American from its men’s program every year since 1997.