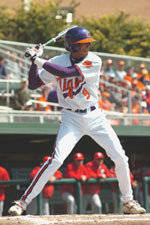 A 10-run ninth inning propelled #2 Clemson to a 16-11 win over #7 Georgia Tech in the ACC Tournament on Saturday night at The Baseball Grounds of Jacksonville. With the win, the Tigers advanced to the ACC Tournament championship game against #25 N.C. State on Sunday afternoon. Clemson improved to 46-14, while Georgia Tech fell to 45-16.

Taylor Harbin and D.J. Mitchell each had three hits, while Harbin scored three runs and drove in three more. Herman Demmink had three RBIs as well. After striking out in his first two at-bats, Luke Murton hit home runs in his next three plate appearances and totaled seven RBIs. Georgia Tech had 14 hits in the game.

Just like the first game of the day between the two teams, Matt Wieters hit a two-out, solo homer in the first inning to give Georgia Tech a 1-0 lead. It was his 10th long ball of the season.

Clemson responded with three runs in the second inning thanks to three doubles. Tyler Colvin led off with a walk and scored on Harbin’s double down the right-field line. It was his fourth double of the ACC Tournament, tying the record for most doubles by a Tiger in an ACC Tourney. Andy D’Alessio followed with an opposite-field double to left-center to score Harbin. Two batters later, Mitchell laced an 0-2 pitch over the third-base bag for a double to score D’Alessio.

The Tigers’ first error of the tournament proved costly in the fourth inning. Wally Crancer led off with a single up the middle. Then Wieters hit a chopper to D’Alessio at first. His throw to second was dropped by shortstop Stan Widmann on a potential double-play ball, and both runners moved up a base after the ball dribbled into left field. Jeff Kindel followed with a sacrifice fly to left-center to score Crancer.

The Yellow Jackets returned the favor in the top of the fifth inning with some shaky defense. Demmink drew a one-out walk, advanced to second on a balk, and went to third on an infield single by Brad Chalk. Chalk tried to steal second base, but Chris Hicks faked to third and got Chalk in a “pickle.” Demmink forced a throw to home, then hustled back to the bag. Catcher Andy Hawranick’s throw to third was high, allowing Demmink to score and Chalk to reach third. After Marquez Smith grounded back to the pitcher for out #2, Chalk scored on a wild pitch, giving Clemson a 5-2 lead.

Murton led off the seventh inning with an opposite-field, solo homer to right field. Two batters later, Hawranick and Michael Fisher hit back-to-back, one-out singles. Blackwood followed with a single off the wall in left field to score Hawranick. Kopp avoided further damage by retiring the two batters he faced in the inning, including Wieters on a strikeout to keep the Tigers ahead 5-4.

Harbin gave the Tigers a two-run cushion when he lined a solo homer down the left-field line in the eighth inning. It was his fifth homer of the season and Clemson’s first long ball of the ACC Tournament.

Kindel led off the bottom of the eighth with a single on a controversial call. Kopp fielded the chopper and attempted to tag Kindel, but first-base umpire Randy Harvey called him safe after Kopp missed the tag. The call proved crucial when two batters later, Murton blasted a two-run homer to left-center to tie the score.

Clemson took the lead right back with 10 runs on nine hits in the top of the ninth inning. Mitchell led off with a bloop single to center and went to second on Adrian Casanova’s sacrifice bunt with two strikes. Demmink followed with a double to right-center to plate Mitchell. After Chalk was hit by a pitch for the second time in the game, Smith singled up the middle to score Demmink. Colvin singled to right field to load the bases and extend his hitting streak to 19 games. Harbin then hit a high fly ball on an 0-2 pitch down the right-field line that fell for a single to score Chalk. D’Alessio followed with a single to right field to plate Smith. Widmann lifted a fly ball to right field on a 3-0 count to score Colvin on a sacrifice fly. Mitchell got his second hit of the inning when he singled through the left side to score Harbin. Casanova followed with a triple to right-center to score D’Alessio and Mitchell. Demmink put the Tigers ahead by double-digits with a two-run homer to right field, his third of the season.

Blackwood hit a one-out, solo homer in the bottom of the ninth inning, his seventh of the season. After three batters reached, Murton hit a grand slam to center, his third long ball of the game and fifth of the season.

Clemson will face the Wolfpack on Sunday at 1:00 PM for the ACC Tournament title. The Tigers will be the visitor and occupy the first-base dugout. The game will be televised live by the Regional Sports Network.