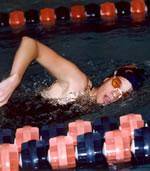 The Clemson men’s and women’s swimming and diving teams will travel to Boca Raton, FL to compete in the Florida Atlantic Winter Invitational on Saturday. The Tigers will take on Denver, Utah and host Florida Atlantic in the meet.

The Clemson men (6-2, 2-1 ACC) most recently finished third at the Nike Cup on Nov. 20-22 with 545 points. Mark Henly led Clemson at the meet, winning the 200 back and placing third in the 200 IM. Eric Shulick took second place in the one-meter and third in the three-meter diving competitions.