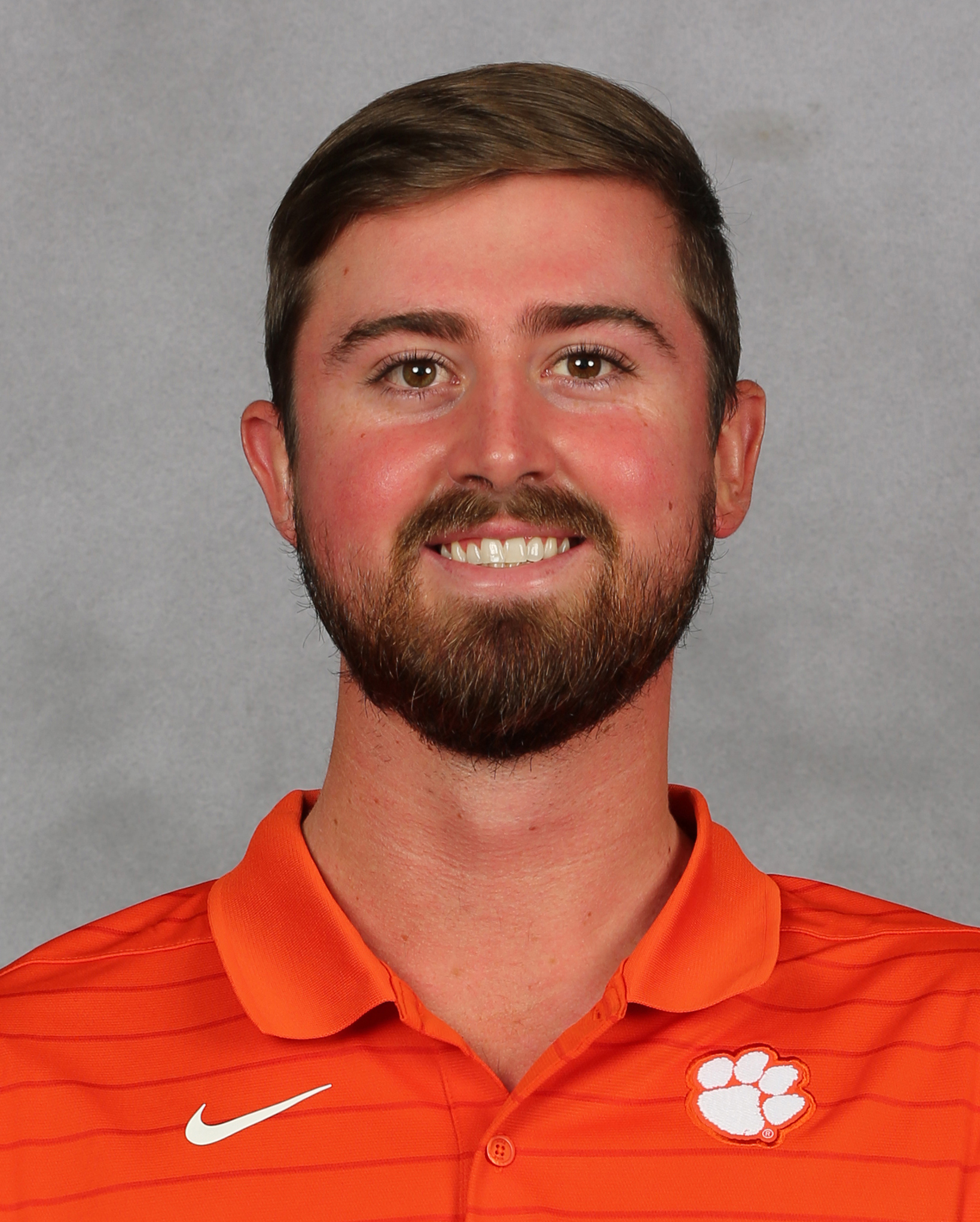 Overview:  Super Senior who has been significant contributor to four top 15 teams …earned All-ACC honors in 2021.…veteran of 31 tournaments and 95 rounds entering 2021-22…has 72.79 career stroke average with six top 10 finishes, 19 rounds in the 60s, and 43 rounds at par-or-better… has made stroke average improvement each year to 71.82 figure  in 2020-21…his career stroke average is just behind that of his father Chris, who was an All-American at Clemson from 1986-90 and won the 1989 US Amateur…Colby is at 72.79 and Chris at 72.71. …his dad played in four NCAA National Tournaments (1987-90), including starter on 1989 Clemson team that finished third in the nation…Colby was first-team Academic All-ACC as a freshman and sophomore… Colby had career best 66  at Hummingbird as a freshman when he won the tournament, and at Ka’anapali Classic in fall of 2019… at the 2021 ACC Tournament  he won the clinching match against NC State in the semifinals of match play with a 20-hole  victory over Carter Graf… big reason Clemson has finished in top 14 in the nation each of the last four years …finished eighth at the NCAA Austin Regional as a sophomore in 2019 with a 211 score in his most significant tournament performance …starter as a freshman on Clemson team that finished 13th in the nation…played in only seven tournaments as a sophomore, but big reason Clemson made it to NCAA Finals at Arkansas… caddied for his dad at the 2018 US Senior Open in Colorado….Colby had solid 2018 NCAA National Tournament, he was Clemson’s third best player overall and the best player in the final round with an even-par 72.

2020-21:   Certainly highlight of the year was winning in 20 holes over Carter Graf of NC State in 20 holes to clinch the 3-1-1 semifinal win for Clemson over NC State at the ACC Tournament….had to make a 12-foot par putt on 19th hole to keep match going, then hit iron four feet from pin and made birdie to win overall match for Clemson… solid all year with 71.82 stroke average, fourth best on the Clemson team… ranked 130 by Golfweek and 148 by Golfstat in final computer polls for 2021…started all nine tournaments and had eight rounds in the 60s, tied for third on the team, and 12 rounds under-par, third best on the team…started the year with a top 10 at Camp Creek Seminole with a 214 score, two-under-par…had his second top 10 at the Valspar where he shot season best 209, four–under…Clemson’s second best player behind Turk Pettit….had career best 16 birdies in that tournament …had 3.10 stroke average on par three holes, a big reason Clemson was in top five in the nation in that category,…had 91 birdies for the year,  second on the team…his score counted in 24 of his 28 rounds…had another top 10 at John Hayt with sixth-place finish after 212 score…finished 14th at  ACC Tournament with even-par 210 on the par 70 course…top Tiger for three of the 28 rounds…posted 1-1 record in the match play events  at ACC Tournament… played in just one tournament in summer of 2021, he finished strong 13th at the prestigious Porter Cup with 278 score…had rounds of 66-73-67-72.

2019-20  Only played in the fall, he was injured for the first two tournaments in the spring, then the season was ended because of COVID19…had the unusual streak of three consecutive tournament finishes of exactly 21st place to start the year….was top player for the Clemson team at the Carpet Classic with a 221 score, good enough for 21st place…his final round 72 was best among the Tigers…finished 21st at Maui Jim with 206 score, four-under-par…then Clemson’s second best player at Nike Invitational at Pumpkin Ridge with 212 score, one-under-par…contributor to Clemson’s team victory at Jack Nicklaus Match Play, he had 1-1 record paired with a Clemson teammate, then won his singles match against Duke’s Evan Katz, 2&1…fourth on the team in stroke average at 71.67, but was just seven-over-par for 15 rounds…had six rounds under-par and all of them were in the 60s…added four rounds at par, giving Patton 10 rounds at par or better ….had best round of the year with a 66 at Ka’anapali Classic on November 3….had strong 67, four-under par at Nike on October 1….had 48 birdies for his 15 rounds…had team best 68.60 in final rounds…had team best 4.57 stroke average on par five holes…his score counted in 12 of 15 team rounds…his score was best of the round five times, tied for the most on the team in the fall.

In 2018-19:  Started the year as a reserve, he played in just one tournament in the fall and finished 68th at the Nike Invitational…in the lineup at the Puerto Rico Classic to start the spring and finished 50th…had good first and third rounds with 71s, but had a middle round 79 that ruined his overall finish…had top 25 finish in the difficult conditions in Jacksonville, Florida at the John Hayt Intercollegiate…had opening rounds of 72-73 before finishing with an 80 in bad weather…had his best round of the spring with a 67 in the second round at the Clemson Invitational…that was his best performance while playing for the Clemson team (had 66 at Hummingbird as an individual as a freshman)…starter at ACC Tournament and had rounds of 75-76 to start, and was taken out of the lineup for the third round…came back to be Clemson’s number-two golfer at the NCAA Austin Regional…shot even-par or better in all three rounds, the first time he did that  in his career…his -2 score of 211 was eighth in the tournament and his best finish of the year…so he went from being taken out of the lineup at ACC Tournament to a top 10 regional finish at the very next tournament…Patton had the best hot streak of the tournament on holes  9-14 in the final round, as he made five birdies and a par in those six holes to bring Clemson into a second-place standing by four shots…he had 10 birdies in the tournament, but five of them were during that stretch on the back nine…Patton was eighth on the team in stroke average entering the regional, but his 211 score was good enough for eighth place in the regional field, his first top 10 of the year…. had at least 10 birdies in four of his last five tournaments, including 14 at the Clemson Invitational and 10 at the Austin Regional…had 11 birdies at the John Hayt, second best among Tigers behind Bryson Nimmer’s 12…had strong 72.67 stroke average in opening round…had 53 birdies for the year and his score counted in 16 of his 19 rounds in team play…had a 73.62 stroke average for the year….had five even-par rounds and three under-par, only player on the Clemson team with more even par rounds than under par….Clemson top golfer in first round of NCAA National Tournament at Arkansas with a 74.

2017-18:  Fifth on the Clemson team in stroke average at 73.32, 11th best by a Clemson freshman in history…had a pair of top 10 finishes, three rounds in the 60s, seven rounds under par and 11 rounds at par-or-better…25 of his 31 rounds were at 75 or better, fourth best percentage on the team…had 72.7 stroke average in first round of tournaments and 72.9 in final round…his score counted in 19 of 25 team rounds, including all four at the NCAA National Tournament in Stillwater, Okla.…had best score of the round three times…hit fairway 72 percent of the time and his GIR was 65 percent… Colby did something his dad did not do by winning the Hummingbird Invitational in early October…took his dad until the spring semester (Gamecock Invitational in March, 1987) of his freshman year to win an event…Colby had rounds of 66-66-70 in winning the Hummingbird as an individual…finished with a 202 score, 11-under-par, tied for the best 54-hole score by a Tiger this year and tied for fifth best (at the time) in school history….that performance earned him a spot in the lineup at the Golf Club of Georgia and he finished with a solid 220 score, four-over-par…had 94 birdies for the year…started  the spring with a seventh-place finish at the Puerto Rico Classic, he shot even-par 213 for the 54 holes…had opening round 69, that was his low round this spring….his final round 72 helped Clemson to the title…finished 12th at Irish Creek with a 217 score to help Clemson to another team title…consistent at ACC Tournament with scores of 74-73-72…had an opening round 70 at NCAA Regional at Bryan, Texas  to tie Doc Redman for team honors that day….Clemson’s third best golfer at the NCAA National Tournament with a 16-over-par 304….but shot 75-76-72 over the last three days, just seven-over-par to help Tigers get ahead of the cutline.…had even par 72 the final round, he finished 69th in the field.

Prior to Clemson:  Finished second at the 5A state championship in May of 2017 at Myrtle Beach with 217 score… that was his fourth straight top 25 finish at the state title….first-team All-State in 2017…a U.S. Junior Amateur qualifier in 2016 when he finished second at the qualifier at Santee National where he shot 141 over the 36 hole…..also finished second at the South Carolina Junior Golf Championship with a two-under-par score of 214…ranked as high as sixth in the class of 2016 on the South Carolina Junior Golf rankings….at Hillcrest High School, won the 2016 4A Regional at Cherokee National in Gaffney, S.C and tied for first at the 4A Upper State Tournament…. finished fourth at the 4A Upper-state tournament in 2015 and finished in the top 25 of the state 4A tournament each of the last four years…..won the South Carolina 4A Upper-state tournament in 2014.

Favorite Course I have Played:   Honors Course in Chattanooga, Tennessee

Best Shot Ever: Double Eagle on #7 at Fox Run

Best Part of my game:   Driving

Biggest Influence on my golf career: My dad 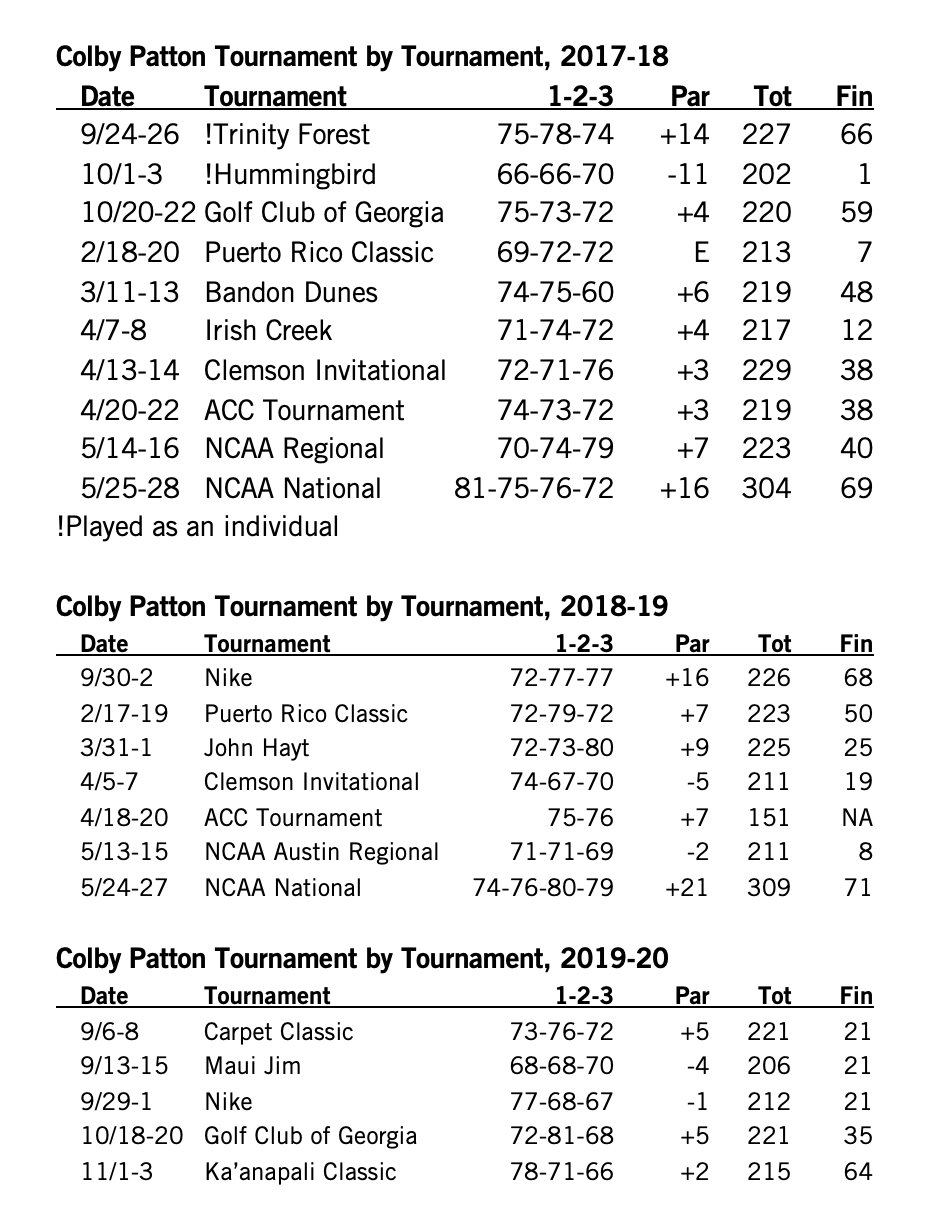 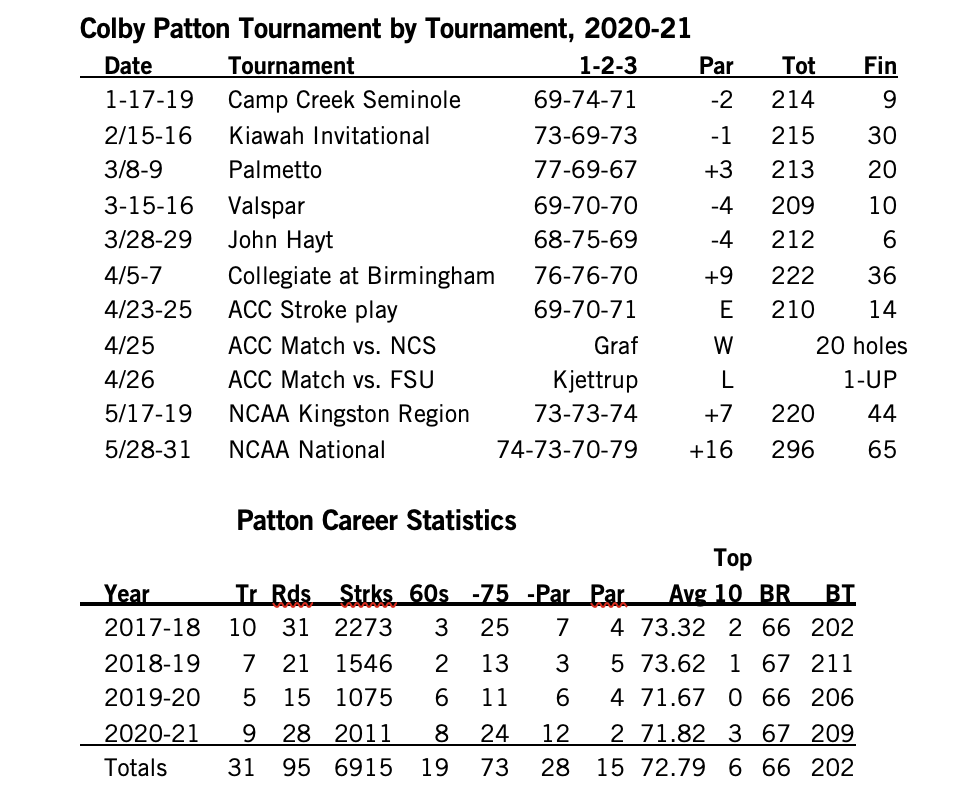