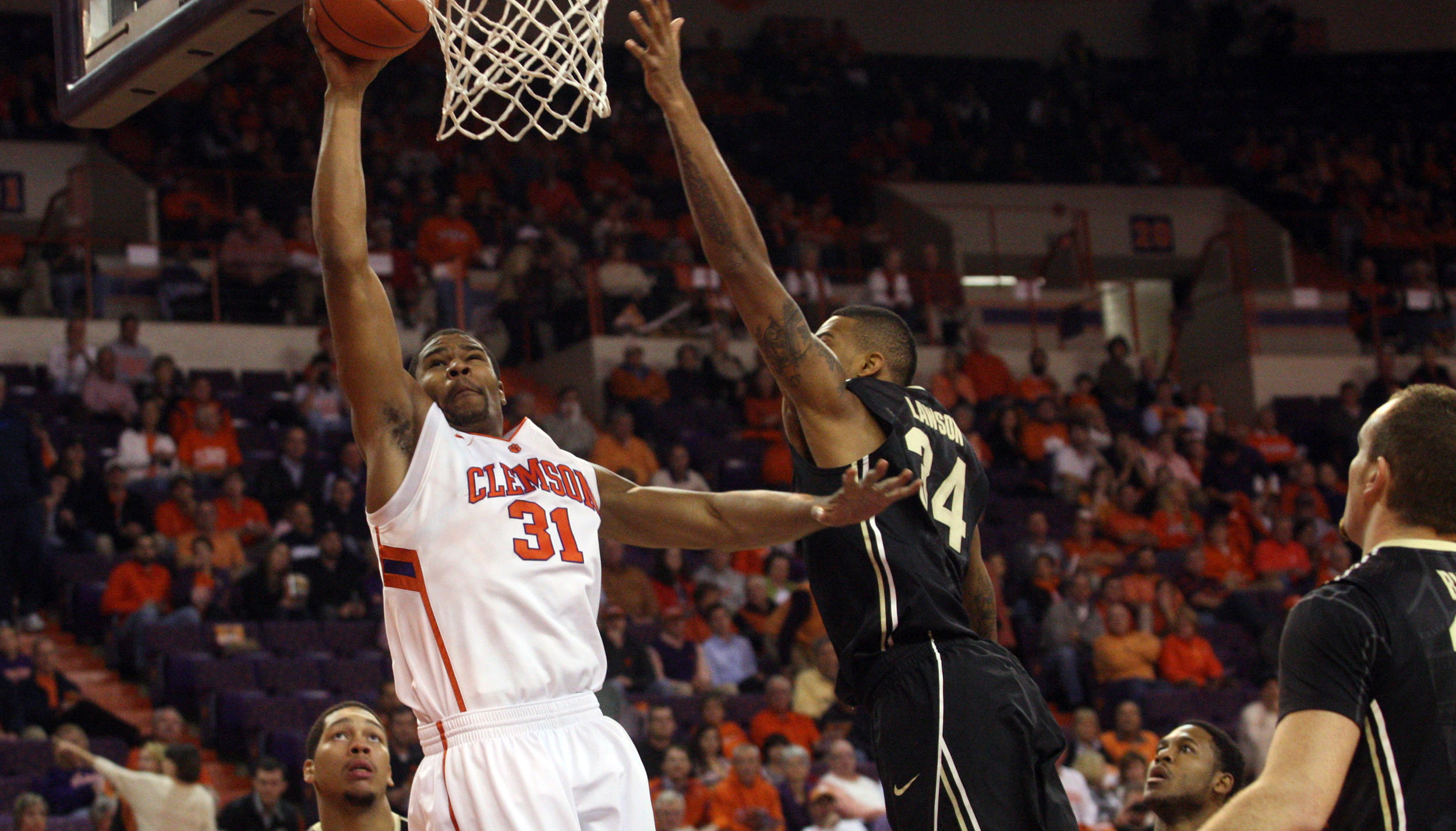 CLEMSON, SC – Purdue shot 57 percent in the first half and guard D.J. Byrd posted 20 of his 22 points in the first half as the Boilermakers outlasted Clemson in the ACC/Big Ten Challenge, 73-61. Purdue led by 20 at halftime and by as much as 23 in the second frame, the Tigers’ largest deficit of the young season. Clemson fell to 4-2 with the loss, while Purdue moved to 3-3 overall with the win.Clemson was led by Devin Booker, who totaled 18 points and eight rebounds in an outstanding 36 minutes of action. Booker made it to the gym just after 6:00 after missing the last two days to be with an ailing family member. K.J. McDaniels added 15 points, six rebounds, three blocked shots and two steals.The Tigers struggled to shoot the ball, hitting only four of 23 three-point attempts. Clemson shot just 39.7 percent overall and 55 percent from the free throw stripe. In addition, Purdue out-rebounded Clemson 41-27. The Tigers did commit just five turnovers for the game, winning the points off turnovers stat by an 18-4 margin.Byrd was the story of the first half, as he hit four straight to give the Boilermakers a 16-7 lead at the 14:30 mark. Clemson was down 14 already at the 10:15 mark as Byrd launched and made a fifth three-pointer. Clemson scored eight of 10 points to cut the lead to 25-17 off a McDaniels steal and jam on the other end.Purdue responded to Clemson’s mini-run with eight consecutive points of its own, the last three courtesy of a wing three by Ronnie Johnson. The lead grew to 20 in the final seconds as A.J. Hammons, a freshman center, hit a hook in the lane.In the second half, Clemson extended its pressure defense to create transition opportunities. Clemson cut the lead to 14 at 45-31 when Booker caught a lob from Adonis Filer for a monster dunk. But on the other end, Purdue responded with a layup and a free throw from Terone Johnson to push the cushion to 16 again. The Tigers pulled to within single digits only once in the second half, at the 1:28 mark on a banked three by Filer. Byrd was limited to only two in the second half, but made 7-of-12 overall and 6-of-11 from deep. Four Boilers reached double figures, including Terone Johnson with 13.Clemson next plays on Sunday, Dec. 2 in Columbia against rival South Carolina. The game will tip off at 12:00 PM from the Colonial Life Arena and will be televised by ESPNU.