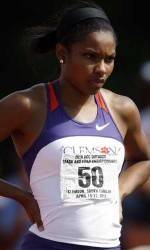 It is the second weekly honor taken home by Sinkler during the 2009-10 indoor and outdoor seasons. She previously was women’s indoor Performer-of-the-Week on Jan. 19. Sinkler, the ACC’s Most Valuable Field Event Athlete both indoor and outdoor this season, became the first Clemson female to clear six feet in the outdoor high jump this past weekend. She hit a mark of 6’0″ even, breaking her own school record. The mark moves her into a tie for eighth nationally, according to the latest rankings.

She started her successful weekend by capturing the long jump crown with a personal outdoor best of 21’1.25″. Sinkler, who won the ACC’s long jump both indoor and outdoor in 2009-10, ranks second in Clemson history in the event behind only Monyetta Haynesworth, who jumped 21’5.5″ in 1992.