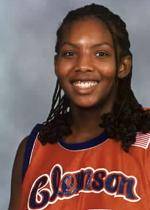 For Tia Andrew, the journey to Clemson was especially long.

“It took 19 hours for me to get here,” said the 6’2″ senior forward, who originally hails from Oklahoma City. And once she arrived, the transition period lasted much longer. “I had to learn how to prioritize my schedule,” she said. “Playing basketball and going to study hall at first were tough to adjust to.”

Coming to Clemson was not just a big trip for Tia Andrew; it is clear that she had the much larger task of adjusting to a new life to deal with after she arrived. “I have not been home since last summer,” she said. “I could not even go home for Thanksgiving, Christmas or New Year’s. That has been the hardest part.”

Despite the transition period that she had to endure, Tia’s decision to come here last season was not nearly as difficult. “What really made me want to come here were the girls on the team,” she said. “When I came to visit, we really did not do anything, but I felt like I was already on the team. The girls were so nice.”

After visiting numerous other schools, Tia realized that Clemson was the team that she wanted to play for. In addition, her relationship with Coach Itoro Coleman has made her playing experience at Clemson much more enjoyable. The advice that Coach Coleman has given Tia has had a tremendous effect on her confidence and motivation.

“I think the most memorable person at Clemson for me, after I graduate, will be Coach Coleman,” she said. “When the team is struggling or when the girls are feeling down, she really knows how to motivate us. She tells us what to do in a positive way.”

Whatever motivating technique it was that Coach Coleman used on her is clearly apparent. In her first season at Clemson, Tia led the team in blocked shots (24) and finished fifth on the team in rebounding, averaging over three rebounds per game.

“Tia’s rebounding ability definitely meets one of our greatest needs,” said Head Coach Jim Davis. “She is capable of being one of the leading shot blockers in the conference.”

Tia’s shot blocking and rebounding abilities force opposing teams to adjust their strategies while illustrating what Tia says is her true game: defense. “My game is really defense,” she said. “I like to be in the background. I will score if I have to, but I prefer not to. My favorite things to do are grab rebounds and block shots. I like to do all the dirty work.”

Aside from her on-the-court abilities, Tia says her enthusiasm is the most unique aspect that she brings to the team. “I think that I bring a lot of energy to the team,” she said. “I am very vocal on the court. I am always talking to the other girls on the team and I try to encourage them.” She admits that sometimes she thinks she may even talk too much, but that is what she likes to do.

Having established herself last season as a contributing member of the team, Tia says that her expectations for this season are different because her teammates, her coaches and Tia herself have raised them. “This year I think the coaches expect more out of me,” she said. “Last year was hard because for me it was a transition year, and I was adjusting to being so far from home. Now that I have adjusted, the coaches have noticed, and now they know that I know what is expected of me; and I think they have raised their expectations too.”

Tia believes that her teammates have raised their expectations of her because she is a senior. “I think the upperclassmen on the team expect more out of me,” she said. “Now that I am a senior, I try harder to offer encouragement to some of the younger girls, because I know that it is tough to come up to the collegiate level and adjust quickly. Whenever they get down or frustrated, I know what they are going through.”

Although Tia acts as a mentor for several of her teammates, her family members serve similar roles for her like the one she serves for the younger girls on the team. Tia’s father played an especially important role for her when she was young, and several times he was the only person who convinced her to keep playing basketball.

“My parents and my brothers have been very influential people for me in my life,” she said. “I am a very family-oriented person. There were a lot of times when my family helped me stay motivated and helped me continue to play basketball. My father, he has been there so many times for me. He always told me and my brothers to ‘never quit,’ and that no matter how bad it gets to just never give up.”

Her father’s determination must have rubbed off on Tia, because she has become the first person in her family to go to college. She has put a lot of pressure on herself to finish, but she has learned to deal with it and keep moving. “I know that there is always going to be a tomorrow; and when I get tired or frustrated, I know that I am playing for a reason.”

Tia Andrew has proven herself as a steady, determined member of Clemson’s Lady Tiger basketball team, and she has demonstrated the ability to overcome adversity many times. So what has she learned from her playing experience? She says that the “real world” skills that she has gained are some of the most important things she will take with her after she graduates.

“I think there will be a lot of things that I remember,” she said. “I will remember most that working hard pays off. When I came here from junior college, where I worked hard, it was totally different. I learned how to prioritize my life and how to work with people. I have also learned how to deal with constructive criticism.”

Tia intends on applying the real world skills she has learned towards her career goals. “I would like to go into the field of criminal justice,” she said. “I want to move somewhere closer to home; I want to do crime scene investigating. But most importantly, I want to do something that I love and what makes me happy.”

Tia Andrew has demonstrated the ability to stay focused both on the court and in the classroom. No matter what career decisions she will make, or what goals she will set, the success she can achieve with the skills she has learned at Clemson appear to have no limits.