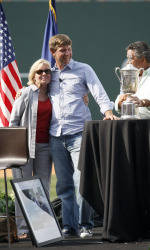 The former Clemson star will receive the award that is sponsored by Piggly Wiggly and named in honor of the renowned golf teaching pro, at the SCAHOF’s 50th anniversary banquet on May 24 at the Columbia Metropolitan Convention Center.

Glover, ranked No. 9 in the PGA money earnings with $3.6 million and No. 16 in the world golf standings, became the first Clemson golfer to win a major. Glover, a two-time first-team All-American at Clemson between 1998-01, also finished fourth at the PGA Championship last year.

Tickets for the event, the largest sports gathering in the Palmetto State, may be obtained by calling the South Carolina Athletic Hall of Fame’s office at 803/779-0905.