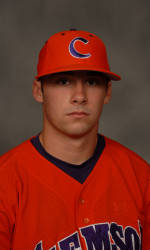 Clemson rising junior pitcher Justin Sarratt and rising senior third-baseman Matt Sanders were selected as starters for the Coastal Plain League All-Star game. Both Sarratt and Sanders will represent the National team in the All-Star game that will be hosted by Asheboro (NC) on Tuesday.

Sarratt, who plays for Thomasville (NC), has been a three-time CPL Pitcher-of-the-Week in 2008. In 46.1 innings pitched over six starts, he has a 5-1 record, 1.17 ERA, and has pitched two complete games, including one shutout. He has allowed just 25 hits (league-best .161 opponents’ batting average), seven runs (six earned), and seven walks with 47 strikeouts. He has also allowed just four extra-base hits.

The righthander from Gaffney, SC had a 2-2 record and 4.34 ERA in 27 appearances (two starts) as a sophomore at Clemson in 2008. He also allowed just six walks in 45.2 innings pitched.