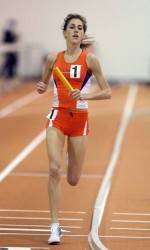 FAYETTEVILLE, AR – Kim Ruck produced an All-America performance in her first trip to the NCAA Championships, leading the Clemson track & field program on day one at the indoor nationals at the Randal Tyson Track Center. Ruck became the first Clemson female to earn indoor All-America recognition since Mareike Ressing did in the 3K in 1994. Ruck re-wrote the school record yet again in the 5K, this time posting a time of 16:01.24 in her first-ever trip to NCAA Nationals.

Brianna Rollins competed in a pair of track events Friday. The freshman from Miami, FL finished one spot outside of qualifying for the finals in the 60m hurdles. She ran a time of 8.213, but two hurdlers in front of her posted times of 8.212. Thus, she was one thousandth of a second out of making the NCAA finals in her first attempt. She then posted a time of 23.79 in the 200m dash, 14th overall. Rollins will compete as one of Clemson’s four freshman legs in the women’s 4x400m relay on Saturday.

Spencer Adams qualified for the finals in the men’s 60 hurdles in his first trip to nationals. Adams posted a personal best 7.80 in the preliminary round. His time ranks sixth-best in Clemson history, moving him ahead of three-time Olympic competitor Dwight Thomas, who ran 7.81 in 2002. The men’s final will be Saturday at 6:35 PM.

It was a tough day for April Sinkler, who ranked among the nation’s top five performers in both the high jump and long jump entering the meet. She placed 11th in the long jump (20’7.25″) and 16th in the high jump after a 5’8.75″ clearance. She has a chance to rebound Saturday in the triple jump, alongside teammate Patricia Mamona, at 6:30 PM.

Miller Moss is 10th in the heptathlon standings after four of the seven events. The Sumter, SC native has a total of 3,057 points after the first day of competition. He started strong with a time of 7.00 in the 60m dash, then followed with solid efforts in the long jump, shot put and high jump. Moss is just 106 points out of seventh place with the 60 hurdles, pole vault and 1000 meter run still to come.

Moss returns to action Saturday at 11 AM. Xavier Tromp, who sat out due to injury.