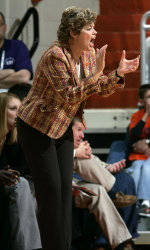 CLEMSON, SC – Clemson women’s basketball head coach Cristy McKinney has announced the addition of Saudia Roundtree to her staff as an assistant coach. Roundtree, a former National Player-of-the-Year at the University of Georgia, began her tenure on June 18.

“We are very excited to have added Saudia to our staff,” McKinney said. “She has an incredible basketball background as a player and has already been a head coach at the division I level. She brings a lot of enthusiasm and energy to the program and will be a great role model for our players. Her personality and success as a player will be a tremendous asset in recruiting.”

Roundtree joins the Lady Tiger program after serving as an assistant coach at the University of Central Florida for the 2006-07 season. Prior to her stint with the Golden Knights, she spent a year as an assistant with the Alabama Crimson Tide. Roundtree began her coaching career at Morris Brown College, where she served as an assistant and was then named interim head coach from 2001-02. From there, she accepted the head coaching position at North Carolina A&T, spending three seasons at the helm of the Aggie program.

“I’m ecstatic to be here,” Roundtree said. “It is a blessing from God and I am so happy to be back home. I am excited to be a part of Coach McKinney’s staff. She is a class act and a great leader and this program will see much success under her.”

Roundtree will be very involved in most aspects of the Lady Tiger program and should have an immediate impact in recruiting. Her playing experience will also allow her to be a great role model and coach for all the players in the program, specifically the perimeter players.

Roundtree joined the coaching ranks after a stellar playing career at Kilgore (Texas) Junior College, the University of Georgia and in the American Basketball League (ABL). The native of Anderson, SC was named the 1994 National Junior College Player-of-the-Year after averaging 26.2 points per game. She then spent two record-setting seasons as the starting point guard for the Lady Bulldogs, finishing her career as one of the most highly decorated players in school history.

In her senior year, Roundtree led Georgia to a Southeastern Conference title and an NCAA Runner-up finish, while garnering consensus National Player-of-the-Year accolades. She was also named the SEC Female Athlete-of-the-Year and SEC Player-of-the-Year in 1996. Roundtree concluded her Lady Bulldog career with over 1,000 points and holds Georgia records for assists in a single season (226 in 1994-95) and assists per game over a single season (6.9 in 1994-95) and for a career (6.4).

She was then the first overall pick by the Atlanta Glory in the 1996 ABL draft and played three seasons as a member of the Glory and the Nashville Noise. Roundtree averaged 12.2 points and 3.3 assists per game with Nashville in the league’s final season.

She earned a Bachelor of Arts in sociology from the University of Georgia in 1996.