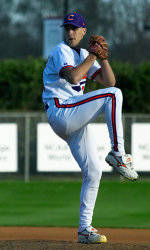 Kris Harvey had two hits and four RBIs to lead Clemson to its second straight win over #9 North Carolina by a score of 7-3 in front of 4,049 fans at Doug Kingsmore Stadium Sunday. Clemson won the series 2-1. The Tigers evened their overall record at 8-8 and improved to 2-1 in the ACC. The Tar Heels dropped to 15-5 overall and 2-2 in the ACC.

Robert Rohrbaugh (1-1) gave up two runs in 6.1 innings to earn the victory for Clemson. The Littlestown, PA native allowed six hits and one walk while striking out four. Adam Kalkhof (2-1) suffered his first loss of the year for North Carolina.

Harvey again led the way for the Tigers offensively. He went 2-for-4 with four RBIs in the series finale, capping off a week in which he went 6-for-13 with three home runs, a double, and 10 RBIs in four games. Justin Webb led the Tar Heels with three hits in four at-bats, as each team totaled eight hits.

North Carolina scored first in the top of the fourth inning. Seth Williams hit a line-drive home run to left field with one out, his fourth of the year. It was the first home run allowed by Rohrbaugh this season.

The Tigers answered in the bottom half of the inning. A single by Travis Storrer and a double by Tyler Colvin put two runners in scoring position with one out. After Stan Widmann struck out, Andy D’Alessio picked Widmann up by crushing a high fastball deep over the right-field wall to give Clemson a 3-1 lead, a lead it would never relinquish.

Clemson loaded the bases with nobody out in the fifth. Harvey hit a high chopping single just over the head of third-baseman Reid Fronk to score David Williams and Herman Demmink. Kyle Shelton made a great defensive play at shortstop to end the inning, which saved two runs.

The Tar Heels battled back in the seventh inning after Rohrbaugh gave way to reliever Daniel Moskos with one out. Webb singled to score Shelton, and then Greg Mangum scored on Matt Ellington’s sacrifice line out to left field. The Tigers then brought in Stephen Faris, who struck out the first batter he faced to end the inning.

Clemson again answered the scoring by the Tar Heels in the bottom of the seventh. The first error of the year by North Carolina left-fielder Jay Cox allowed runners to advance to second and third with one out. Harvey continued his hot hitting in the series by lacing a double that hit the left-field line to score Demmink and Storrer.

Faris pitched a scoreless eighth and Drew Fiorenza kept the Tar Heels off the board in the ninth, as the Tigers won their fifth game against a top-25 team this season. The Tiger pitching staff also allowed just six runs all weekend.

The Tigers will go on the road this week for spring break and play five games. Clemson will play Tuesday (7:00 PM) and Wednesday at Old Dominion before returning to ACC action next weekend at Maryland.