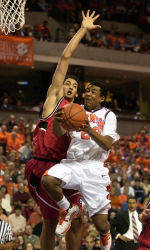 Clemson junior guard Shawan Robinson was named second-team All-ACC Tournament by the media covering the 52nd annual event held this weekend at the MCI Center in Washington, DC. Robinson led Clemson to an 84-72 victory over Maryland in the first round and an 88-81 loss to second-ranked and number-one seed North Carolina in the second round.

For the two games, Robinson made 15-24 shots from the field, including 9-12 on three-point shots. He had just four turnovers in 55 minutes and scored 41 points in those 55 minutes. He was Clemson’s top scorer in the two games combined, 18 more than any other Tiger.