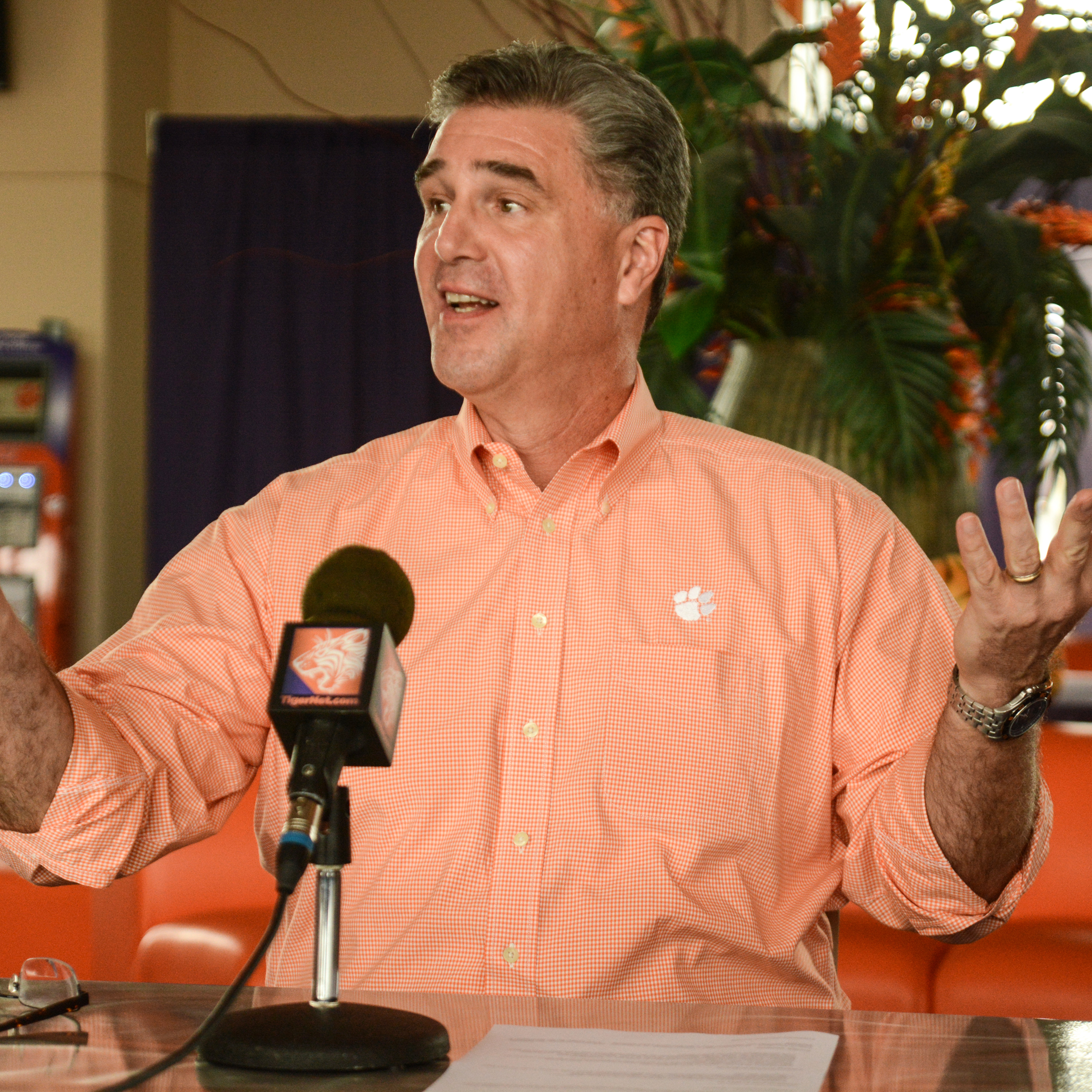 Director of Athletics Dan Radakovich met with members of the local media Friday, discussing the ongoing facility renovations on campus, ticket sales and a host of other items as Clemson’s teams prepare for the 2015-16 athletic year.

Radakovich: Good afternoon. I just wanted to try and get together once every quarter and talk about a few things that are going on. Certainly, as you have all heard, there is still an awful lot of construction going on here.

The good news is it will all be ready and operational for the opening game against Wofford. The work on the pedestrian bridge and oculus is just getting the finishing touches. We will have the floor laid for the pedestrian walkway ready to go on September 5 … there’s still some aesthetic pieces ongoing.

The suite and club seat areas not only have sold incredibly well — as a matter of fact they’re going to have an event there later on today for those suite holders so they can view their suite for the first time — and that project has gone incredibly well. A few other items that were listed in the “15 for 15” notification, that had gone out earlier this week, that had fan improvement and fan enhancement things going on within the department for our fan base will also be implemented during this first year.

We’re incredibly excited for the opportunity to start this football season, it has been eagerly anticipated. We have sold a record number of tickets, we have four games that are sold out right now; the Notre Dame game in October is one of the hottest tickets that I have been able to be a part of in an awful long time. There are a lot of good things coming within our football program and structurally here within Memorial Stadium.

We have a few other projects that are in different stages. Littlejohn Coliseum is in its beginning stages; the demolition of the basketball annex has been complete without any issues. If you go to our webcam on our Web site, you’ll see work that’s going on inside; that’s going very well. We continue to be on point with that project, although it is very early from a timing perspective.

Then our baseball building down the first base line is in its final stages of completion. I hope by the end of the week that we are able to put our baseball team in there and they can begin their fall practice out of that new building. It is going to provide coach Monte Lee and our student-athletes a great facility to train from and recruit to; it’s an exciting time.

The other project that’s out there right now is our football operations project. We will be going to our Board of Trustees to get the second round of approvals for that project, and then we will begin going through the state process, the second state process, meeting with the commissions of higher education, joint bond review committee and the budget control board. The latter of those two meetings will occur in October. If everything works well and we are able to receive those approvals, we would hope to begin the construction on that project sometime in late December or early January.

That is where we are on the construction front. That has obviously taken up an awful lot of time over the last couple of years and will into the next couple of years. The response from our fan base has been tremendous. We have sold every one of the suites; we have a few more seats available in the South Club.

Q: What would be included in the new football operations center?

Radakovich: Well, it would be office areas for the coaches, meeting rooms for the players, a new locker room, new weight room, new training room, area for a meal service, and a new cafeteria. A spot where our student-athletes can go in a central location — having everything such as their practice and meeting facilities all together under one roof.

We’re in the planning and schematic design phase of that right now, so hopefully in the coming months we’ll be able to share some preliminary visions of what that will look like.

Q: A lot of fans have a misconception of what the oculus is supposed to do, or its function on gameday. Can you speak on the purpose of this addition to Memorial Stadium?

The idea of creating that pedestrian bridge through the oculus really is going to allow folks to enter in the closest gate to where they parked and then traverse the stadium to their seats with what we hope is a lot more comfort, and some really great views along the way as well.

Q: What concerns are there with construction going on all over the area regarding the road traffic and foot traffic on gamedays?

Radakovich: Well, traffic has always been something that we are very concerned about. We have worked with Dr. Wayne Sarasua of our civil engineering department, who is a traffic expert. He did a study back in 2004, and we reopened that study in 2014 and there are some changes that we are going to make in our traffic that will hopefully assist with the inflow, but most importantly outflow after the game.

For example — and again, these are all detailed in the “15 for 15” document — we will close the road going into the town of Clemson and have four roads going out. Highway 93 will have a coned off contra-flow lane going up towards the Ravenel area, Highway 123 area, for the folks that park up in that spot.

We’ll be doing a few other things that we hope will assist in the traffic. Certainly the foot traffic here on gameday will always be the purview of the officers we have at crosswalks, to ensure their safety as they cross from one side of a big street to another.

Q: Clemson’s fans in the past have shown a desire to not play home games on any day other than Saturday. Do you see that being an issue in the coming years?

Radakovich: I don’t believe so. We played a couple of years ago on a Thursday and we kind of made a deposit in the bank with our conference. There are some schools in our league where non-traditional gamedays work better than others, so I think that as we rotate through, I’m never going to say never that we won’t play another Thursday night game. We will not play on Friday.

But a non-traditional game, on Labor Day or a Thursday night, somewhere down the road? Maybe that is going to be in our program’s best interest from a visibility perspective. But in the foreseeable future, we don’t have any of those on our agenda.

Q: What was your biggest takeaway from your recent College Football Playoff meetings?

Radakovich: The playoff meetings were held last week in California. I think the biggest takeaway is consistency. Our process is going to remain the same.

We have a couple of new members, Kirby Hocutt from Texas Tech and Bobby Johnson, the former head coach of Furman and Vanderbilt (and Clemson alum); they are new members. So these meetings were a lot of indoctrination of them into our processes.

But I think as it relates to the returning committee members, it’s again just to talk to the people who provide us data and how we want to get that information. There was a tune up on all of the video links we have available to us and all of those things were really kind of covered in that meeting.

As far as big changes are concerned, it is really very consistent with what we had done last year.

Q: Has it been approached or discussed on whether or not to begin selling beer or alcohol on gamedays?

Radakovich: We talk a little bit about that, but it really hasn’t gotten to first base. It is all about that fan improvement and fan experience type of thing. You know, Death Valley is such a unique place. We are blessed right now with a fan base that wants to be here, that continues to come here not only for what happens on the field, but what happens around it. And we need to protect that.

I don’t know that we have the impetus at this time to look at that as a new revenue stream, and whether it would even make that a large revenue stream. If we sold alcohol, there would be other things that are part of the Clemson tradition that might need to be altered, and we’re not ready to go down that road at all.

Q: Do you monitor other schools as they begin to sell alcohol at their stadiums?

Radakovich: I do. I also talk to my peers who have done that, and they give their opinions on whether or not it has been successful and what the positives and negatives are that are associated with that. Whether it’s here or one of our other venues, that is something we might look at down the road.

Q: What positives have you seen come from the Solid Orange Fan Advisory Board (SOFA)?

Radakovich: The SOFA committee that we put together last year has really been a huge positive for us. It has given us 44 new people out there in all parts of the stadium and in all parking lots telling us what they see on gamedays; what’s good, what’s bad, what do they hear from the folks they come to the game with? We continue to gather that information. Some of the things that you see on the “15 for 15” sheet came directly from that committee. They are a valuable source for us.